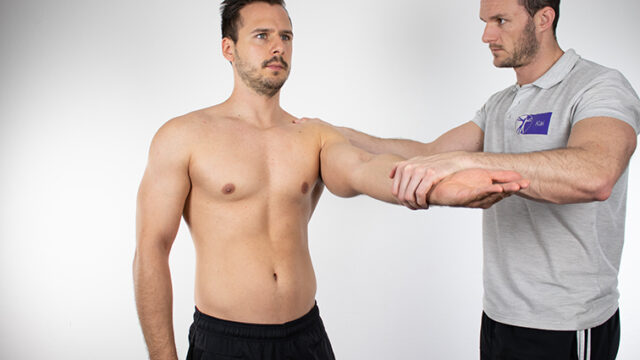 The Speed’s Test is a common orthopedic test to assess for biceps pathology (like in biceps tendinopathy) as well as SLAP lesions in the shoulder.
Originally the Speed’s test was designed to test for tenosynovitis of the long biceps tendon but is now being used for several pathologies of the biceps. In their meta-analysis from 2012, Hegedus et al. found a sensitivity of 20% and a specificity of 78% for the Speed’s test in the detection of SLAP lesions in the shoulder. The test scored equally low in the detection of biceps tendinopathy in several other diagnostic papers. For this reason, the Speed’s test has a low clinical value to in or exclude SLAP lesions or other biceps pathology.

The literature describes two different performances of the Speed’s test:

For the first version, ask your patient to extend his elbow and fully supinate the forearm. Then the patient flexes his shoulder from 0 to 60 degrees while the examiner gives resistance. This is probably how Spencer Speed discovered the test himself as he was experiencing pain in the shoulder when he was performing a straight leg raise test in his patients with an outstretched arm.

When a patient’s arm is placed in the examining position for the Speed’s test and downward pressure is applied, the biceps tendon acts like a suspensor cable from its insertion on the superior labrum to the arm. Increased tension in this cable and if inflammation is present is thought to result in pain in the proximal shoulder. So in both cases, the test is positive if your patient reports pain in the bicipital groove where the long tendon of the biceps enters the shoulder capsule.

Bennett WF. Specificity of the Speed’s test: arthroscopic technique for evaluating the biceps tendon at the level of the bicipital groove. Arthroscopy: The Journal of Arthroscopic & Related Surgery. 1998 Nov 1;14(8):789-96.