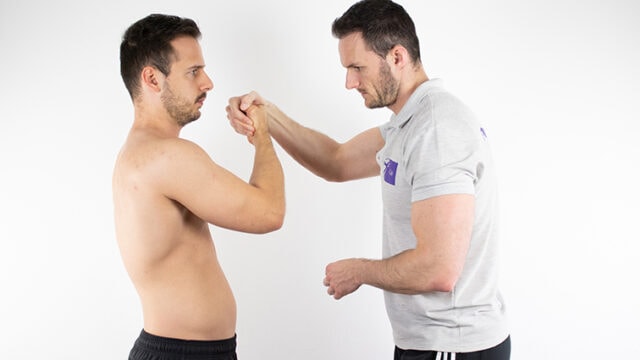 The Upper Cut Test is an orthopedic test to assess for SLAP lesions / the superior biceps labrum complex in the shoulder.

Kibler et al. (2009) found a sensitivity of 79% and a specificity of 78% in the detection of biceps tendinopathy which was the most accurate test for this pathology in their study. For this reason, we give this test a moderate clinical value to in- and exclude biceps pathology.

To perform the test, your patient’s shoulder is in neutral position and he is asked to flex his elbow to 90 degrees, fully supinate the forearm and make a fist. The examiner covers the patient’s wrist with his contralateral hand and asks the patient to rapidly bring their hand up and across the body towards the chin, like in an uppercut punch in boxing, while the examiner gives resistance.
This test is positive in case of pain or a painful pop over the anterior shoulder.

The authors reason that the upper cut test performs better than traditional tests as the contraction of the biceps is isotonic instead of isometric and the traditional tests do not require arm motion. During the upper cut test, the arm is moved into flexion and slight internal rotation, which requires the biceps to be activated concentrically and to be moved in the bicipital groove with arm rotation. This combination of isotonic muscle activation creating tension in the muscle and the simultaneous dynamic rotation of the arm is thought to be the basis for producing symptoms.

Kibler found a regression analysis in their study and found that a combination of the upper cut test and Speed’s test was the best model for detecting biceps lesions.