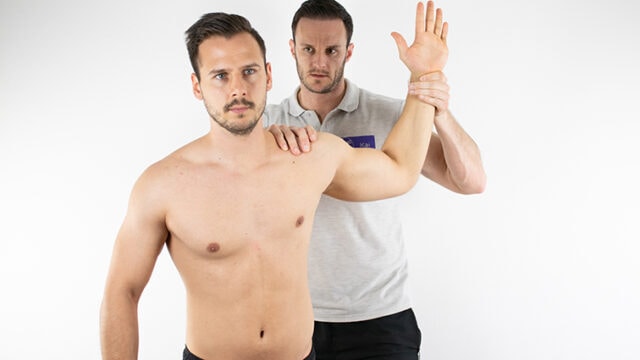 Although lesions of the long head of the biceps tendon (LHBT) and glenoid labrum have historically been considered independently, modern literature suggests a strong functional and symptomatic interdependence of these 2 structures.The biceps-labrum-complex, abbreviated as BLC has 3 clinically relevant zones: inside, junction and bicipital tunnel.Despite recent advances in MRI technology, the literature shows that MRI is not able to accurately diagnose BLC lesions, nor is arthroscopy able to detect hidden extra-articular bicipital tunnel disease.

Taylor et al. in the year 2016 evaluated the 3-Pack examination consisting of the Active Compression Test, Throwing test, and bicipital tunnel palpation and found a substantial to almost perfect inter-rater reliability. Both, the Active Compression Test and the bicipital tunnel palpation have sensitivity values ranging from 88-96% and 82-98% for injuries of the 3 locations of the biceps-labrum complex respectively with specificity values ranging from 46-64% and 65-79%.
As those 2 tests have good accuracy to exclude lesions of the biceps-labrum complex including hidden extra-articular bicipital tunnel disease, we give them a moderate clinical value as this is the only study evaluating the combination of those 2 tests.

To perform the Active Compression Test have the patient flex his shoulder to 90°, adduct 10-15°, and internally rotated so that his thumbs are pointing down. To standardize this position, you can use both shoulders, so that the dorsum of both hands is in touch with each other. Then the examiner applies downward pressure. The maneuver is then repeated with the shoulders in external rotation and the palms facing upwards.
The test is positive for pain “inside the shoulder” with the thumb pointed down, which is eliminated or reduced in the palms-up position.

To perform the throwing test, the patient’s shoulder is abducted to 90 degrees with the elbow flexed to 90 degrees. The shoulder is then brought into maximal external rotation mimicking the late-cocking position. As the patient steps forward with the contra-lateral leg and moves into the early acceleration throwing phase, the examiner provides isometric resistance.
Again, pain inside that shoulder indicates a positive test.

For the bicipital tunnel palpation, the examiner manually palpates along the course of the extra-articular long head of the biceps tendon with the arm in neutral. The arm can then be manually internally and externally rotated during palpation to confirm the location of pain in the bicipital tunnel.

While the Throwing Test was not as accurate with a sensitivity ranging from 73-76% and a specificity ranging from 65-79%, it also reached high reliability in contrast to the traditional tests.