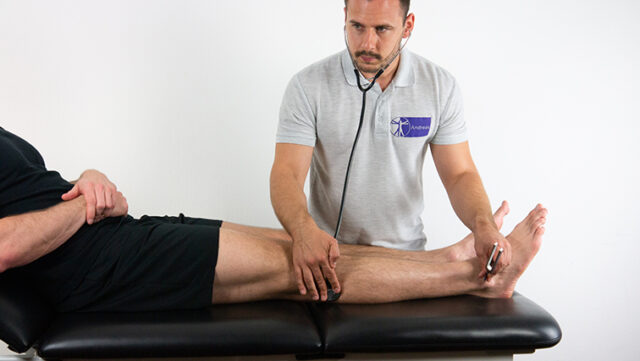 Diagnosing fractures using an MRI or similar reference standards may not always be readily available in certain remote areas or other situations that nonetheless require clinical decision-making. The method to diagnose fractures using a 128Hz tuning fork and a stethoscope was proposed to solve this problem.

Mugunthan et al. (2014) reviewed the current literature and report positive likelihood ratios ranging from 1.1 to 4.2 and negative likelihood ratios from 0.21 to 0.49. The included studies assessed for fractures in different bones and no conclusion can be made whether tuning fork tests detect fractures in 1 area more than another. Furthermore, the type of fracture has had a big influence on diagnostic accuracy. Stress fractures, avulsion, and buckle fractures resulted in false negative results as they leave the bone injured but intact and do not impede sound conduction. Based on these results, the clinical value is moderate.

In order to conduct a tuning fork auscultation test, you’ll have the patient in a comfortable position with the affected limb exposed.

The tuning fork will be placed distal to the suspected fracture.

To demonstrate, we will use the fibula. In this case, I will place the stethoscope on the head of the fibula. Then strike the tuning fork on the cushion to make it vibrate and subsequently place it on the distal tip of the lateral malleolus. Carefully listen for 6-8 seconds whether you hear sound conducted through the bone and compare it with the unaffected limb.

The test is considered positive for a fracture if there is diminished or absent sound from the injured limb.

Other common tests to screen for fractures in different body parts are: