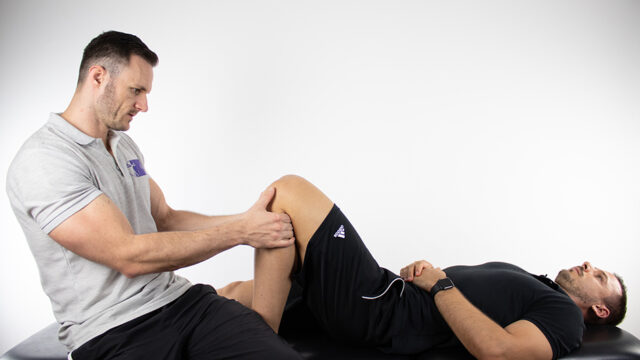 The incidence of meniscus tears is estimated to be 61 per 100.000 in the general population and approximately one third of them are sports-related. While traumatic tears often occur in the menisci periphery and are seen in patients younger than 30, more complex and degenerative patterns tend to occur in older adults.

Shrier et al. (2010) argue that the physical examination for meniscal tears is different than diagnostic tests as meniscal tears are heterogeneous in nature, for example, posterior vs. anterior tears. Therefore, the authors reason that sensitivity and specificity values should not be relied on for meniscus injuries, but the choice of physical tests should rather be based on the logic underlying how different tests stress different parts of the meniscus.
Despite the limitations we just mentioned, the Finiochietto Test has not been validated by any diagnostic studies yet anyways. For this reason, the clinical value is unknown.

To perform Finochietto Test or Jump Sign the patient’s knee is brought to 130-140 degrees of flexion and the position is fixated by the examiner. Similar to the anterior drawer test in the knee, the examiner pulls the tibia ventrally, in this case in a more aggressive manner than with the drawer test.

This test is positive if the examiner feels a “jump” as the torn posterior horn of the meniscus is displaced anterior to the tibiofemoral point of contact. The jump is barely audible or visible and does not have to be painful necessarily.

Be aware that laxity associated with an ACL or PCL tear is not considered a positive test and that this test can also be positive in case of loose bodies or a congenital discoid meniscus.

Other common tests to assess for meniscus injuries are: