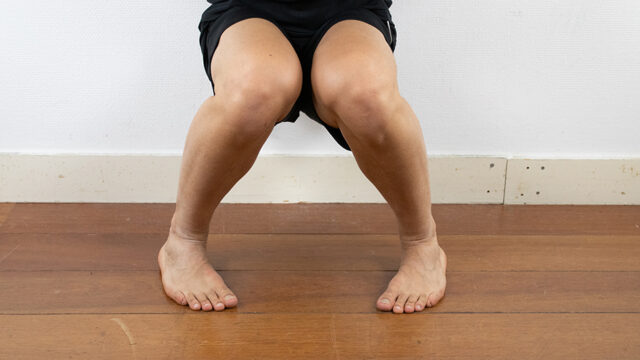 Many orthopedic tests for meniscus tears are performed in non-weight-bearing positions, whereas most of the symptoms of a torn meniscus occur during weight-bearing activities. The Ege’s test tries to overcome this shortcoming by mimicking McMurray’s Test in a weight-bearing position. Due to its provocative nature, it is not suitable for patient’s in the very acute stage after injury, as they have to be able to bear weight and squat without pain and limitations in range of motion.

A study by Akseki et al. (2004) evaluated Ege’s test. They found a sensitivity for later and medial meniscus tears of 64 and 67% and a specificity of 90 and 81% respectively. In this single, but well-conducted study, the test performed better than McMurray’s test and joint line tenderness, but findings yet have to be confirmed.
We, therefore, give this test a moderate clinical value.

To perform the Ege’s Test, the patient stands with fully extended knees and both feet 30 to 40 centimeters apart. To detect a medial meniscal tear, the patient is asked to squat with both legs in maximal external rotation and then slowly stand up. The distance between the knees increases and each knee becomes externally rotated as the squatting proceeds. For lateral meniscal tears, both lower extremities are held in maximum internal rotation while the patient squats and stands up. A full squat in internal rotation is almost impossible even in healthy individuals. So a slightly less than full squat is required in internal rotation and the patient is allowed to use an object nearby as a support. In contrast to the medial meniscus test, the distance between the knee decreases, and each knee becomes internally rotated as the squatting proceeds.

This test is positive when pain and/or a click (which is sometimes audible by the examiner) is felt by the patient at the related site of the joint line. Further squatting is stopped as soon as the pain and/or click is felt. If the patient experiences pain while moving out of the squat, the test is scored positive as well.

The authors mention that pain is usually felt around 90 degrees of flexion. Anteriorly located tears produce symptoms in earlier knee flexion, whereas tears on the posterior horn produce symptoms in more knee flexion. While accuracy was decreased in patients with degenerative arthritis and Patellofemoral disease, interestingly the test was even more accurate in ACL-deficient knees and in knees with effusion.

Other common tests to assess for meniscus injuries are: