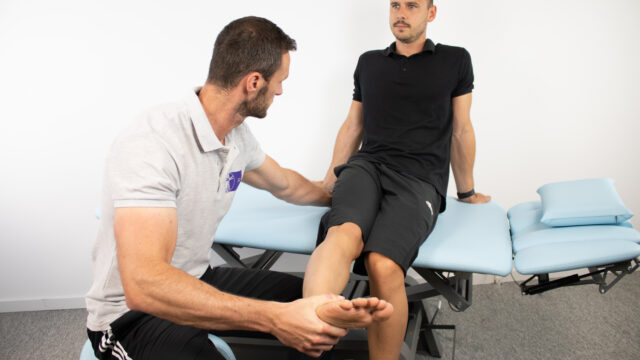 According to a study done by Martin et al. (2013), the seated piriformis stretch test had a sensitivity of 52% and a specificity of 90% in the diagnosis of endoscopically confirmed sciatic nerve entrapment. This is the only study evaluating this test yet, which is why we give this test a moderate clinical value to confirm the condition in practice.

Before you conduct the test, make sure you have examined and excluded more prevalent pathologies in the lumbar spine and SI joint that could explain the patient’s symptoms.
To perform the test, have the patient in sitting position over the edge of the examination table with the hip flexed to approximately 90 degrees and the knee extended. While palpating the sciatic notch, the examiner adducts and internally rotates the limb.

The seated piriformis stretch test is thought to lengthen the deep rotators of the hip joint and create dural tension of the sciatic nerve in an effort to elicit familiar pain.The test is positive if the patient’s familiar complaints of gluteal pain and/or paraesthesia radiating into the posterior aspect of the lower extremity are reproduced.