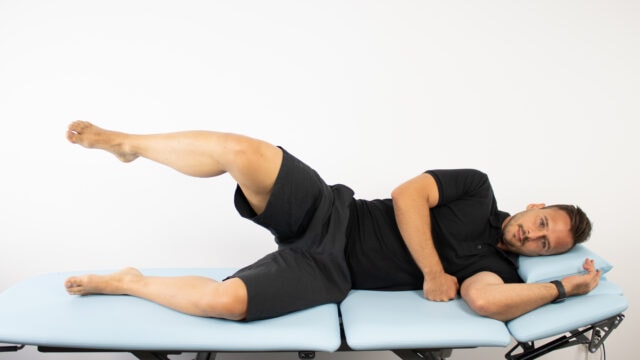 The structures that can be involved in sciatic nerve entrapment are not only the piriformis, but also fibrous bands containing blood vessels, gluteal muscles, hamstring muscles, the gemelli-obturator internus complex, vascular abnormalities and space-occupying lesions.For this reason, the term “deep gluteal syndrome” instead of “pirformis syndrome” is now preferred.

No diagnostic studies have been done on the Beatty maneuver yet, which is why we give it a questionable clinical value in practice.

Before you conduct the test, make sure you have examined and excluded more prevalent pathologies in the lumbar spine and SI joint that could explain the patient’s symptoms. To perform the test, have the patient lie on the unaffected side with hips and knees flexed. Then ask your patient to abduct his thigh so that it comes off the table.

This test is positive if deep buttock pain is elicited in the affected upper side, while back is described in patients with lumbar disk disease.