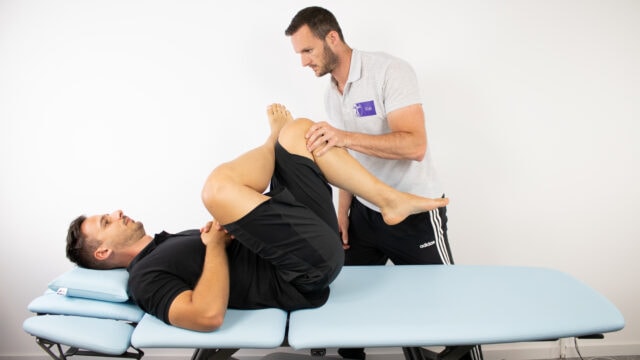 Commonly reported symptoms include hip or buttock pain and tenderness in the gluteal and retro-trochanteric region. The pain is often described to be sciatica-like, often unilateral and exacerbated with rotation of the hip in flexion and knee extension. Other symptoms include intolerance of sitting for more than 20 to 30 minutes, limping, disturbed or loss of sensation in the affected extremity, and pain at night getting better during the day.

According to Michel et al. (2013), the HCKL maneuver had a sensitivity of 100% and a specificity of 60% in a population with deep gluteal syndromy and symptomatic lumbar disco-radicular conflict in the L5 or S1 region. However, it is unclear which gold standard was used in the study, which is why the clinical utility of this test in practice remains questionable.

Before you conduct the test, make sure you have examined and excluded more prevalent pathologies in the lumbar spine and SI joint that could explain the patient’s symptoms.
To perform the test, have the patient in supine position. The patient is asked to externally rotate the hip to be tested and to place his heel on the contralateral knee. Then the examiner flexes the contralateral hip. The authors suggest, that this position might have to be held for several tens of seconds up to 1 minute in order to elicit symptoms.

The test is positive if the patient’s familiar complaints of gluteal pain and/or paresthesia radiating into the posterior aspect of the lower extremity are reproduced.