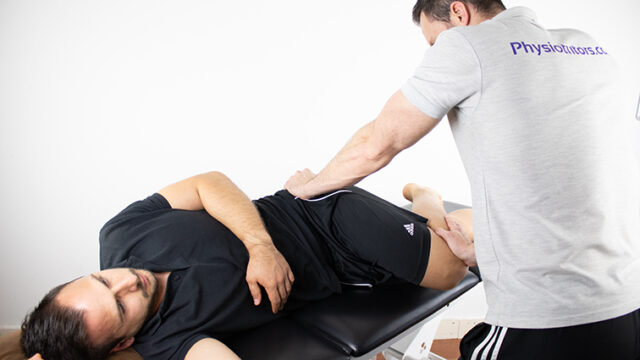 In about 15% of the population, the sciatic nerve runs through the piriformis muscle instead of underneath it These people are more prone to experience so-called piriformis syndrome.

Nowadays, piriformis syndrome is called “Deep gluteal syndrome”, abbreviated as DGS is defined as pain in the buttock area caused by a non-discogenic entrapment of the sciatic nerve in the subgluteal space.
The structures that can be involved in sciatic nerve entrapment are not only the piriformis but also fibrous bands containing blood vessels, gluteal muscles, hamstring muscles, the Gemelli-obturator internus complex, vascular abnormalities, and space-occupying lesions.
For this reason, the term “deep gluteal syndrome” instead of “piriformis syndrome” is now preferred.
Commonly reported symptoms include hip or buttock pain and tenderness in the gluteal and retro-trochanteric region. The pain is often described to be sciatica-like, often unilateral, and exacerbated with rotation of the hip in flexion and knee extension. Other symptoms include intolerance of sitting more than 20 to 30 minutes, limping, disturbed or loss of sensation in the affected extremity, and pain at night getting better during the day

To perform the piriformis test have your patient in side-lying position at the edge of the table. Then bring your patient’s upper leg to 60 degrees of hip flexion With a flexed knee and the lower leg completely extended. With the other hand fixate the pelvis and then apply downward pressure at the knee

This test is positive if your patient is complaining about pain in the buttock area or radiating pain down the backside of his leg.