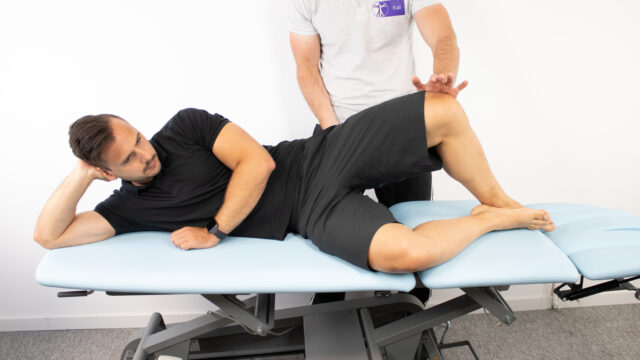 According to a study done by Martin et al. (2013), the active piriformis test had a sensitivity of 78% and a specificity of 80% in the diagnosis of endoscopically confirmed sciatic nerve entrapment. This is the only study evaluating this test yet, which is why we give this test a moderate clinical value to in- and exclude the condition in practice.

Before you conduct the test, make sure you have examined and excluded more prevalent pathologies in the lumbar spine and SI joint that could explain the patient’s symptoms.
To perform the test, have the patient in side-lying position on the unaffected side. The patient flexes the knee of the affected side and places his foot on the examination table. The examiner palpates for the piriformis muscles running from S2 to S4 to the greater trochanter. While the examiner gives resistance at the flexed knee with his other hand, the patient is asked to drive their heel into the examination table, initiating active hip abduction and external rotation.

The test is positive if the patient’s familiar complaints of gluteal pain and/or paraesthesia radiating into the posterior aspect of the lower extremity are reproduced.