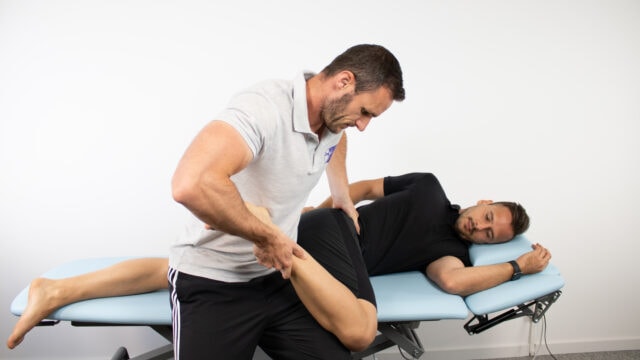 Fishman et al. (2002) compared the FAIR test with its ability to delay the Hoffmann-reflex, also called H-reflex, which is a sensitive, but not specific measure for nerve conduction. They found a sensitivity of 88% and a specificity of 83% for the FAIR test when using a delay of 3 standard deviations above the normal H-reflex. As the H-reflex is not an accurate gold standard and no other studies have been conducted on this test, we give it a questionable clinical value in practice.

Before you conduct the test, make sure you have examined and excluded more prevalent pathologies in the lumbar spine and SI joint that could explain the patient’s symptoms.
To perform the test as shown in the study of Fishman, have the patient lie on the unaffected side with his upper hip flexed to 90 degrees, maximal adduction and the upper knee flexed to 90 degrees. While both acetabula are kept vertical apply upward and lateral pressure to the shin while passively rotating the hip internally to 45 degrees or as near as the patient can tolerate.

This test is positive if the patient reports pain at the intersection of the sciatic nerve and the piriformis.