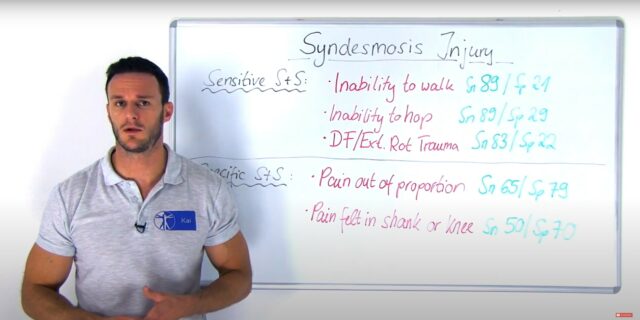 Every year about 600.000 people in the Netherlands suffer from ankle trauma, which equates to an extremely high incidence of around 3,5% per year. While it takes 15 days on average to return to sport after usual inversion traumas according to Sman et al. in the year 2014, return to sport occurs more than 4 times later in case the syndesmosis has been injured as well. While syndesmotic injuries might need surgical repair in some cases, loading has to be way more gradual during conservative treatment.

Like in many other pathologies our patient history can give us important clues as to if the syndesmosis is injured or not.  Sman et al. (2015) describe the following signs & symptoms with a high sensitivity that should be asked first:

With the syndesmosis as an important stabilizer, it seems logical that patients are having problems during walking and especially hopping when their ankle stability is impaired. On top of that most syndesmotic injuries occur under maximal dorsiflexion and external rotation with the foot firmly planted. For this reason, it seems logical that this mechanism of injury is an important sign.

If some of these signs are positive next to some sensitive tests like the local tenderness of the syndesmotic ligaments and the dorsiflexion external rotation stress test, one should proceed to ask for more specific signs& symptoms like:

In many cases, patients load their ankles too early after a syndesmotic injury as swelling is often minimal and the injury masks as being minor. For this reason, patients often don’t progress and pain levels are still higher than normal even weeks after the trauma. Secondly, the pain location is usually felt higher than in a normal inversion trauma as the syndesmosis fixates the fibula to the tibia.

In addition, the authors also recommend performing the Squeeze Test, as this test is another specific test to confirm syndesmosis injury.

Other common orthopedic tests for syndesmosis injuries are: