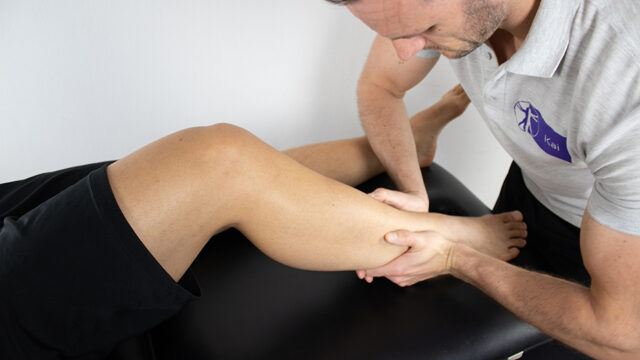 The syndesmosis is the interosseous membrane that connects the tibia to the fibula. A syndesmosis rupture can result from both inversion trauma and, more importantly, from trauma to the ankle joint in external rotation and dorsiflexion. According to the guideline on ankle injuries of the Dutch Association of Physical Therapists, KNGF, the incidence of syndesmosis injury among all ankle injuries is approximately 1%. Sman et al. (2015) studied the validity of the syndesmosis squeeze test and found a sensitivity of 26%, with a specificity of 88%, in diagnosing syndesmosis injuries. This means that the test has a rather weak accuracy to confirm syndesmosis lesions.

To perform the test, the patient lies on his back. Now the tibia and fibula are compressed laterally by the examiner – hence the name “squeeze”. Here, one starts proximally and slowly moves distally until one reaches the medial and lateral malleolus. According to Nussbaum et al. (2001), the severity of the syndesmosis injury can be derived from the position of the pressure pain. The more proximal the patient experiences pain during the “squeeze,” the more severe the syndesmosis injury and vice versa. The test is considered positive if the patient experiences pain during the test provided that a possible fracture, contusion, or compartment syndrome has been previously ruled out.

Other common orthopedic tests for syndesmosis injuries are: