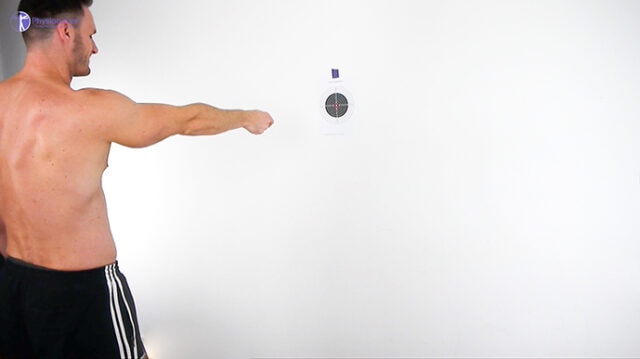 Joint repositioning sense/JPS or “proprioception” has been shown to be reduced in shoulder laxity, those who participate in overhead sports, when being fatigued and in people with shoulder pain. For example, Glendon et al. (2016) showed that there was no difference between the dominant and non-dominant arm in healthy individuals, while Balke et al. (2011) showed that patients with shoulder instability performed significantly worse in three angles of flexion than healthy controls. So there may be value in assessing this entity in your shoulder patient at baseline and at follow-ups to gauge the progress of your intervention.

Now the question is, how can we do this in a reliable manner that does not require complicated machinery or very expensive tools? The answer might lie in a beam of red light. Laser pointers. Vafadar et al. (2016), evaluated three measures of shoulder flexion joint positioning sense on their inter and intra-rater reliability. Next to a gonio- and inclinometer, the laser pointer method was evaluated and they found an overall inter-rater ICC of 0.86 and inter-rater ICC of 0.78. This is the first time that reliability measures were calculated for this assessment and testing protocols between studies differed in terms of where the laser pointer was attached to the arm, or whether patients were given visual practice, which is why we give it a moderate clinical value for now.

We would like to demonstrate a simplified JPS measurement for shoulder movement, which makes us of the findings of the previously mentioned studies.

For this setup, the patient stands behind a line about a meter away from the wall. With the engaged laser pointer in one hand, they are asked to flex the arm to 90°. you can measure the angle easily and reliably with your smartphone inclinometer.

Attach the scoreboard to the wall so that the center is aligned with the laser pointer.

We will assess flexion, abduction, and returning from external rotation. The patient is then allowed three practice rounds with eyes open. The fourth attempt is done with eyes closed and you will record their score. As the maximum score for each attempt is 10, the cumulative maximum when assessing 3 movements is 30.

There should be no more than a 10% difference in scores between sides.

Joint Positioning Sense is also commonly assessed in patients with neck pain. If you would like to learn more about that, check out our post here.