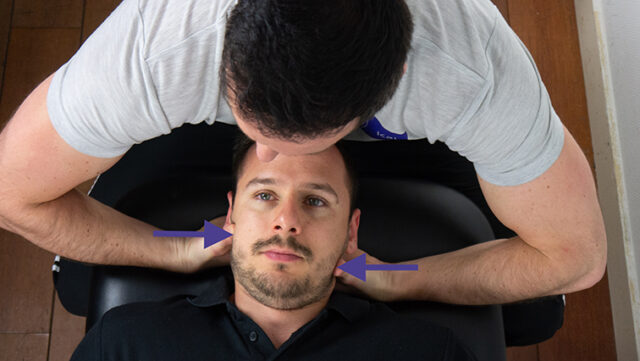 Upper cervical spine instability has a prevalence rate of 0.6% according to Beck et al. (2004) and is associated with inflammatory conditions such as rheumatoid arthritis, ankylosing spondylitis, as well as trauma and congenital deviations such as Down’s syndrome or Marfan’s disease. In order to safely apply manual therapy techniques to the cervical area, it is necessary to screen for possible upper cervical instability.

According to Cattrysse et al. in the year 1997, the lateral shear test has a Kappa value for the intra-rater-reliability of 0.09 to 0.67, so poor to substantial, and an inter-rater reliability of -0.64 to 0.45, which is poor to moderate. For this reason, we are giving this test a weak clinical value in practice.

In order to perform the test, have your patient in supine position and stand at the head of the bench. Place your index finger of one hand dorsolaterally against the arch of C2, while the other hand holds onto the patient’s occiput and C1 from lateral on the opposite side. The patient’s upper cervical spine is then brought into slight flexion in order to move the dens of C2 posteriorly from the anterior arch of the atlas. Then both hands are approximated to take up slack of the soft tissue and then the movement is judged on the degree of movement and end-feel.In this case, we are testing the left transverse ligament on its integrity. Afterward, repeat the test for the right side as well.

This test is positive if a lateral translation occurs between the segments, which is usually absent in healthy subjects.

Other orthopedic tests to assess upper cervical instability are: