Orthopedic Special Tests are not so special! Here’s how to use them…

Lately, we’ve been (falsely) accused by a well-known physiotherapist on social media that we were “clearly promoting orthopedic special testing”. And yes, for an outside viewer it might seem this way, as our YouTube channel basically features all orthopedic tests that are out there. In this blog, we will explain our stance on orthopedic special testing, sense and non-sense, and how to actually use them in practice!

If you prefer watching instead of reading, you can also check out our video that this blog post is based on here, which we already published back in 2019:

How it all started

Andreas and I started our YouTube channel in 2013 when we were second-year students. The initial goal was to help first-year students practice orthopedic assessment by providing them with high-quality videos covering the content we practiced with them during tutoring sessions. Obviously, we had little experience ourselves, but as nearly all orthopedic tests are meticulously described in scientific papers, so we could base our video content on the literature.

Little did we know back then that our channel would explode in such a fast time and we would become widely known as the “test guys”. With growing experience and knowledge we became more and more aware of the limitations of the “mighty” special tests. At the same time, we made it our mission to create an extensive repository featuring basically all orthopedic tests for the following reasons:

How good are special tests really?

In our e-book, we have published over 300 different orthopedic physical tests or “special tests”. However, most of these tests are not that special and it is good to also talk about their limitations. It might come as a surprise to you, but Andreas and I personally don’t use many physical tests in practice, but we’ll come to that in a bit.

If we look at the clinical value of these tests we have labeled almost two-thirds as either weak or unknown. Only 7% of all tests have received a strong value as a stand-alone test. Our colleagues Chad Cook and Eric Hegedus come to a slightly stricter conclusion and found that only 4% of the tests they evaluated have a high clinical utility.
As many followers asked for it, we have created a YouTube playlist with tests with a high clinical value

So why do most tests perform so weak? In most cases, special tests are just not specific enough to provoke just one structure. In the empty can test, for example, 8 other muscles are equally active as the supraspinatus (Boettcher et al. 2009). So when pain is provoked the test doesn’t necessarily tell you what the source is, because it could be any of the activated muscles. Next to the fact that a lot of tests have not been evaluated regarding their reliability or accuracy at all, a lot of accuracy studies contain a high risk of bias. The problem in most cases is that the gold standard was insufficient or studies were done in a retrospective manner as stated by Cook et al. (2017).

If you are active on social media, you have probably seen that orthopedic tests are demonized and labeled as useless. Like with manual therapy, the pendulum has swung completely in the opposite direction. The problem that we see with special tests (as well as with manual therapy by the way) is that the expectations healthcare students and providers have from orthopedic tests are unrealistic. These expectations might stem from the way we were taught these tests in school: “You do a McMurray test and in case it’s positive, the patient does have a meniscus tear”. In the early days of school, the focus is on learning how to properly perform these tests and not so much on the interpretation of test outcomes in the light of diagnostic studies including sensitivity, specificity, likelihood ratios, and so on. That stuff is often covered later on in a physio’s educational career (in our case in our Master’s) and let’s be honest: most therapists hate statistics! (If you do, but you’d like to learn more about statistics, check out this blog post!)
Making a diagnosis is such a complex process, so why do we expect that one special test will give us all the answers? It doesn’t make sense, but yet this is the standard that we compared special tests against. If this was the case, then patients could just go online, check out our YouTube videos and diagnose themselves (which unfortunately happens).

In essence, special tests are no different from a question you ask during patient history taking. It’s one puzzle piece that guides you towards or away from a certain hypothesis. Like certain questions, some tests can have a bigger influence than others.

So how should you use special tests in practice and what do we do ourselves?
First of all, it has to be said that there is and always will be a certain degree of uncertainty in your medical diagnosis that you will have to learn to deal with during your career as a clinician. Simpkin et al. (2016) have written a great piece about this dilemma. So although patients always want a definite diagnosis, it is often not possible and sometimes also not per se necessary on a structural basis.

If you start out your diagnostic process data from epidemiological data can be extremely helpful to guide you in a certain direction. For example, patellar tendinopathy is a pathology that is prevalent almost exclusively in young jumping men, while gluteal tendinopathy is almost only seen in elderly sedentary women. So knowledge about epidemiology can be very helpful, which is why we have included epidemiological research for every pathology we cover in our online course.
As a second step, signs & symptoms that you specifically ask for during your history taking will make a certain diagnosis more or less likely. If, for example, a patient reports a popping sound and immediate swelling in the knee within 1 hour with hemarthrosis after a pivoting movement in a soccer or basketball match, the chance that he or she suffered an ACL tear becomes way more likely.

How to actually use orthopedic special tests

Now only as the last step would you then try to either exclude or confirm your diagnosis with 1 or more special tests of at least moderate value. If we follow the recommendations by Sackett et al. (2000), special tests usually don’t add much value if you are almost certain of a diagnosis – say somewhere around 80% plus – or certain of the absence of the diagnosis – say 20% or less. In these cases, we often do not have to test anymore at all. This is of course highly dependent on the suspected pathology and much lower in serious pathologies that you’d definitely want to exclude with a screening test.

So the whole process from knowledge about epidemiological data, patient history, and special testing can be seen as a filter that eliminates different hypotheses during each step until you are left with one main ICD hypothesis and possibly another less probable competing one. If you end up having to perform special tests for 5 different pathologies you need to work on your knowledge about epidemiology or signs&symptoms for different conditions, so you can filter earlier in the process.

So all these special tests do and what they should be used for at the end of the diagnostic process is to make an ICD hypothesis more or less likely. Even the best test is probably useless without a thorough clinical reasoning process before, which is why self-diagnosis based on a couple of tests is not helpful and patients watching this video should see a local physio or get in touch with our partner Arjan Elshof from yourphysio.online.
The more accurate a test, the higher the impact it has on the probability or in other words the better it is to in or exclude the condition. For this reason, it’s essential to have knowledge about the sens and specs, and even better the likelihood ratios of the tests that you use. As we have mentioned that only a few tests have high accuracy, so it is advisable to make use of test clusters rather than stand-alone tests.
One last thing: Don’t only focus on hypotheses on an ICD or pathology level, but also create hypotheses to evaluate modifiable factors on a functional, psychosocial or environmental level like outlined in the ICF model…think about the RPS form. For example, an ICD diagnosis of hip OA doesn’t directly guide your treatment decision, but rather your evaluation of fear of movement, decreased hip abduction strength, passive hip extension and impaired balance for example.

To sum it up: Expectations on orthopedic tests are unrealistic. Most special tests are not special at all and rather weak provocation tests. They do have their place, but knowledge about epidemiology and good patient history are way more important in most cases.
Thanks a lot for reading! 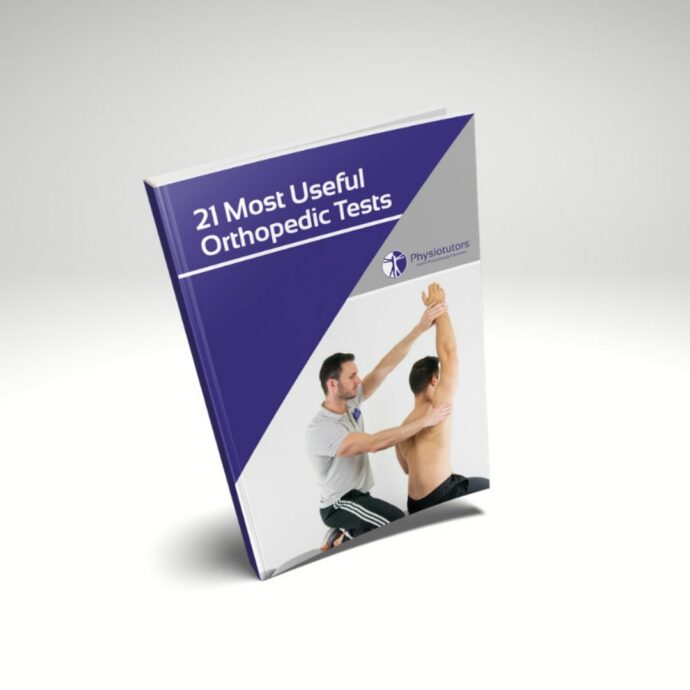