Is ITB syndrome also called runner’s knee really caused by friction and caused by a tight ITB?
Should we stretch and foam roll or is it all about glute training?
We will answer these and more common questions in this myth-busting blog post!

First of all, we would like to thank Lizzie Marlow who gave a fantastic speech at our 1st Physiotutors conference about ITB syndrome. This post is basically Lizzie’s talk in a nutshell with a few inputs from us here and there. So let’s look at myth number 1:

1) ITB syndrome is the only source of lateral knee pain.

First of all ITB syndrome is certainly the most prevalent cause of lateral knee pain with a reported incidence as high as 12% of all running-related overuse injuries. There are surely other sources that can cause pain at the lateral knee. Typical signs & symptoms for ITB syndrome are worse pain when running downhill or on narrow trails and a spike in training volume history. If the patient reports pain posterolaterally, you will have to take distal femoral biceps tendinopathy into account. In contrast to ITB syndrome, biceps tendinopathy worsens when running uphill, is worse with higher speeds, but gets better when warmed up.

Furthermore, you have to consider patellofemoral pain which is very common in runners. PFPS is usually worse with loaded flexion, walking stairs, or after prolonged sitting – also called the Cinema sign. At last, lateral meniscus pathology or early osteoarthritis might be a cause of pain in runners regularly running on hard surfaces, who report pain on deep squatting or twisting the knee. This more prevalent in patients above the age of 40. Even some morning stiffness might be present in this group.
To conclude: ITB syndrome is not the only cause of lateral knee pain.

2) ITB syndrome is caused by friction & Rubbing over the bursa at the lateral epicondyle of the femur.

Originally, the idea behind ITB syndrome was that the ITB flicks over the lateral epicondyle of the femur. This would occur at around 30 degrees of flexion when the ITB changes its force direction from an extension force at the knee to a flexion force or vice versa. However, Fairclough and colleagues (2006) showed that there is actually no native bursa under the Iliotibial band. On top of that, the same authors (2007) showed that the Iliotibial band is anchored to the distal femur by fibrous strands making friction at the knee impossible. The sensation of “flicking” that runners report is rather an illusion of movement that is created by changing tension in the ITB’s anterior and posterior fibers during knee flexion. But what is ITBS then? The author’s reason that the band moves medially during knee flexion as a consequence of tibial internal rotation which compresses the fat pad under the ITB against the epicondyle. With extension, the ITB moves laterally again. Excessive compression of the fat pat may trigger an inflammatory response which could be the nociceptive generator in ITBS.

First of all: How do we know if the ITB is tight? We’ve mentioned this earlier on our channel, but a study by Willett et al. (2016) have shown that Ober’s test is not a valid test for ITB shortening.

Instead, it rather measures a shortening of the hip capsule. The only thing we have to “diagnose” ITB syndrome is provocation tests like the Renne’s and Nobel Compression test that you can watch below:

4) Stretching and foam rolling are effective treatments for ITB syndrome

A study by Seeber et al. (2020) has looked at the stiffness of the ITB band. They concluded that the ITB can withstand substantial forces and is basically inextensible. Moreover, they found that it actually ruptures at around 80 kilograms of tension. For this reason, the authors concluded that clinical stretching will probably not lead to prolonged elongation of the band.

At the same time, the ITB gets foam-rolled a lot in physio practices and gyms all over the world. However, the expectation that foam rolling will break down adhesions or lengthen the ITB band is unrealistic. Just looking at it from a biomechanical standpoint, a compression without stretch cannot lead to an elongation. What may be possible is to stretch the muscles that attach to the ITB, but then again we have discussed the limitations of stretching on muscle elongation in another video. What stretching probably achieves is an increased pain-tolerance to stretch in short term. What a study by Wilhelm et al. (2017) found is that the tensor fascia latae muscle is actually capable of elongation in response to a clinical stretch in contrast to the ITB, but they are calling for future research to see if there is actually permanent elongation. Our prediction is: they’re probably not going to find any permanent lengthening. We would be very surprised if this is different in the TFL compared to other muscles.

At last, if we assume that ITBS is caused by excessive compression rather than friction then all of these approaches would just lead to further irritation of the fat pat underneath the ITB. So those treatments probably make ITBS worse.

So how do we treat ITBS then? The general recommendation is to strengthen the glutes in order to reduce hip adduction and thus reduce the stress on the ITB.
This very much depends on the patient: While there are patients with an increased valgus that might surely benefit from hip strengthening, the second group displaying ITBS are commonly men with knee varus.

In this group, hip training might not be as effective as in group 1. On top of that, a study by Willy et al. (2012) has shown that glute training does not change biomechanics.

For runners, it eventually boils down to a mix of addressing running biomechanics, addressing training errors, and neuromuscular deficits.

To learn more about the management of runners with injuries, including initial rehab, load management, strength training, and running re-training, check our comprehensive online Running Rehab Course with access to all information related to the rehab of running injuries.

Willy RW, Davis IS. The effect of a hip-strengthening program on mechanics during running and during a single-leg squat. Journal of orthopaedic & sports physical therapy. 2011 Sep;41(9):625-32. 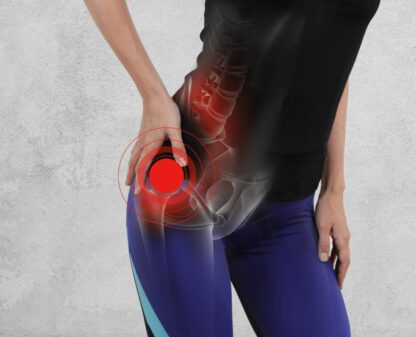