The concave-convex rule by Freddy Kaltenborn is taught in many physio schools throughout the world and chances are high you have learned it too. But does its concept stand the test of time and evidence or is it flawed like many other concepts?

The Rule in a Nutshell

The concave-convex rule by Kaltenborn tells us which part of the joint capsule is stressed when we move an adjacent joint partner:

When a convex joint surface is moving, the roll and glide occur in the opposite direction.

When a concave joint surface is moving, the roll and the glide occur in the same direction.
You can watch a video in the top right corner in which we cover the concept in more detail

Kaltenborn used this knowledge of arthrokinematics to determine the appropriate direction of translational glide in order to determine which part of the joint capsule should be mobilized. But is it really that simple?

Do roll and glide happen in a joint according to the rule?

Bayens et al. (2000) examined joint kinematics of the glenohumeral joint in the late preparatory phase of throwing and they found that the glenohumeral joint does not act as a ball-and-socket joint. In their study, the humeral head actually translated posteriorly in the late cocking phase – contrary to what we would expect. There is more evidence showing that roll and glide in a joint do not seem to follow the Kaltenborn rule: Scarvell et al. (2019)  found that knee flexion was actually coupled with a posterior translation of the femoral condyles – contrary to what we would expect based on the Kaltenborn rule. The same is true for another study by Bayens et al. (2006) where they found a posterior translation of the radial head during supination in the proximal radio-ulnar joint, while the convex-concave rule predicts anterior gliding of the radial head. How can those findings be explained?

Schomacher (2009) argues that we should not forget that the humeral head is rolling posteriorly in the late throwing phase which will of course move the humeral head posteriorly. The net translation of the humeral head in this study is only a few millimeters. To put this into perspective, consider an adult-size humeral head with a circumference of 16 cm. A motion of 90° of GH joint abduction occurring purely due to a rolling motion (with no concurrent anterior glide at the articular surface) would theoretically cause the humeral head to just roll off the glenoid about 4 cm. Clearly, a significant, concurrent anterior glide of the humeral head must occur and the fact that the humeral head moves only a couple of millimeters is proof of a significant glide. So despite the results of Bayens, there is no contradiction to the Kaltenborn rule. In order to really say something about rolling and gliding, we have to differentiate between the movement of the center of the head of the humerus and the movement of the joint surfaces, for example with dynamic radiographs.

Does the rule tell us in which direction we have to mobilize?

Let’s look at a study by Johnson et al. (2007) who used the concave-convex rule to increase external range of motion in patients with frozen shoulders:
Based on the concave-convex rule of Kaltenborn the authors argued that in external rotation of the glenohumeral joint, the convex part (head of the humerus) will glide anteriorly, while it will roll posteriorly on the concave part (in this case, the glenoid) – similar to the reasoning we have for the apprehension test.

Our take on this study is first of all we’re wondering if external rotation is rather a spin move in the joint than an actual roll and glide movement. We would rather expect a pure roll and glide in horizontal abduction. Second of all, Neuman (2012) points out that the convex-concave rule was never intended to establish the direction of a manual glide, applied at a joint, that would best increase a targeted movement. The rule merely describes the arthrokinematic pattern that minimizes the inherent migration of the center of the convex member in the direction of the roll.
Physiotherapists should not mobilize a pathological joint according to a rule but treat pathological clinical findings, which are correlated with the patient’s complaints. Neuman argues that perhaps the capsular tightness associated with the patients’ pathology caused the humeral head to migrate to a more anterior resting position than normal relative to the glenoid. The use of a posterior glide might have preferentially stretched parts of the capsule, allowing the humeral head to be more centralized relative to the glenoid. This new position might, in turn, have partially unloaded the anterior capsule, thereby allowing greater external rotation. Without objective data on which part of the capsule was most restricted and the position of the humeral head at the start and end range of motion, this scenario is purely speculation, and others are possible.

The question is: Can we even influence a joint capsule given that joint mobilization only happens in the toe phase when we have a look at the stress-strain curve of collagen?
We might be able to create a little bit of creep if we hold the mobilizations at end-range, but as often with manual therapy, the effects are probably neurophysiological. That could also explain why it is probably less relevant which part of a certain capsule is stressed.

Is the Kaltenborn rule just misinterpreted?

Okay, let’s sum it up: Is the Kaltenborn concave-convex rule flawed or just misinterpreted? No, it still describes arthrokinematic movement in terms of role and glide in a joint. Can it be used to determine in which direction we have to mobilize in order to improve a specific osteokinematic movement? Probably less so. The rule might be a starting point, but for each patient we will have to assess limitations in range of motion and roll and glide individually, thereby keeping the low reliability in mind. Given the evidence on the working mechanisms of manual therapy, it might be irrelevant which part of a joint capsule we are stressing as stretching a capsule is probably not possible and the effects on pain and increased range of motion are likely to be achieved through this neurophysiological mechanism.

Learn 5 essential mobilization/manipulation techniques in 5 days that will skyrocket your manual therapy skills immediately  – 100% For Free! 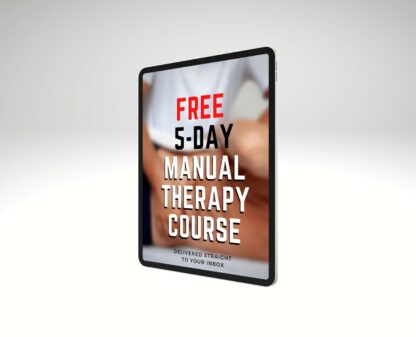