In this blog post, we are going to discuss 7 absolutely crucial facts about tendons that you probably didn’t know, but that are very important to improve your tendinopathy rehab.

Let’s jump right into it:

1. The nociceptive driver of pain in tendons is unknown. Pathology seen on imaging is not the driver of pain. Vascularity is not the source of pain, merely a marker of tendon degeneration. On top of that, there are no sensory nerves deep in the tendon, but in the periphery around the tendon. Nerves that grow into a pathological tendon, are sympathetic nerves, not sensory. At last, central sensitization is probably less a problem in lower limb pathology compared to upper limb pathology (Plinsinga et al. 2015, Plinsinga et al. 2018).

2. We are not able to repair/heal degenerative tendon pathology. In other words, no surgery, no shockwave therapy, no injections whatsoever, and not even exercise are able to repair or heal a degenerated tendon. Docking et al. (2019) reason that with little ability to sense tensile load, the cells in the degenerative part of the tendon may be under-stimulated and not receive the necessary mechanical stimuli to remodel, explaining the limited capacity of the pathological tendon to remodel and normalize. While you think that this might be bad news, the good news is: it’s also not necessary. A study by Tsehaie et al. (2017) showed that 24 weeks of eccentric exercises for the Achilles tendon did not produce changes outside the limits of detectable change in the tendon, but yet patients improved. They also found that o MRI parameter at baseline predicted the change in symptoms, so even if your MRI looks terrible, it doesn’t matter.

3. The tendon loading rate probably explains why tendinopathy is associated with repetitive stretch-shorten cycle (SSC) rather than heavy loads. The SSC occurs during any activity that requires the tendon to store and release energy like a spring. Everything else is easy for a tendon e.g. eccentric movements, high weight. The loading rate is calculated in BW/sec. Here are two examples of the patellar and the Achilles tendon in different activities. So the highest loading rate for the patellar tendon is to land in a stop jump sequence, like in a basketball or volleyball, while leg pressing 3x bodyweight has a very low loading rate. This is the same for the Achilles tendon where calf raises have a very low loading rate for the tendon while running and hopping have a very high strain rate. Interestingly, the very best athletes who can run fast or jump high are the ones who are also at risk to develop tendon pathology the most, probably because they can load their tendons faster than anyone else. This phenomenon is also called the “Jumper’s knee paradox”, described in an article by Visnes et al. (2013).

4. The Combination of compressive loads and tensile loads is more damaging to any of the two alone. A study by Soslowsky et al. (2002) compared 3 groups of mice to each other: In 1 group they manipulated the acromial arch to simulate external compression, one group had higher tensile loads as they had to run on a treadmill more than other groups and a combined group. They found that extrinsic compression did not cause injury until overuse activity was introduced. While compressive properties may be important, tensile properties are more relevant properties in a tissue such as a tendon. The results show that the combination of external compression plus tensile loads led to the greatest injury.

5. Intense loading of tendons results in net collagen degradation for up to 36h. A study by Magnussen et al.(2010) showed this effect in three groups of very intense exercise, which were 36km of running, 1 hour of repetitive kicking and 10 sets of 10 repetitions of knee extension at 70% maximal voluntary contraction. This means that we need sufficient recovery time to prevent tendinopathy and it’s advisable to space out training sessions for the tendon to every other day or less.

6. A pathological tendon has more good structure than a normal tendon (Docking et al. 2015). This means we can load these tendons because we have loads of good tissue. Any therapies for tendon pathology are not necessary, because we cannot change the structure of the pathological part anyways. For this reason, Docking and colleagues came up with the quote “Treat the donut, not the hole” – in other words, focus on the healthy structure and not the pathological part.

7. 66% of Achilles tendon ruptures are asymptomatic ruptures (Kannus et al. 1991). This means these people never had Achilles tenderness, stiffness, pain, or dysfunction. However, there had to be some kind of pathology present in the tendon as the authors showed that 98% of ruptured tendons had degenerative pathology, while 2% had other pathology. Jill Cook explained this in a Twitter post stating that it’s impossible to rupture a normal tendon in vivo without pathology.

Interestingly, a study by Yasui et al. (2017) showed that only 4% with Achilles tendinopathy go on to rupture the tendon. So pain in tendinopathy might actually be protective of a rupture and this is a very good and reassuring message for patients who are in tendon pain and afraid to rupture their tendons.

Alright, how many of those 7 were completely new to you?
As always, thanks a lot for reading!

Whether you’re working with high-level or amateur athletes you don’t want to miss these risk factors which could expose them to higher risk of injury. This webinar will enable you to spot those risk factors to work on them during rehab! 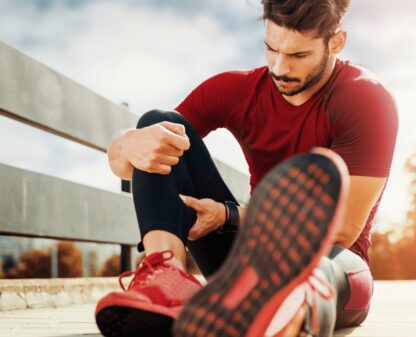