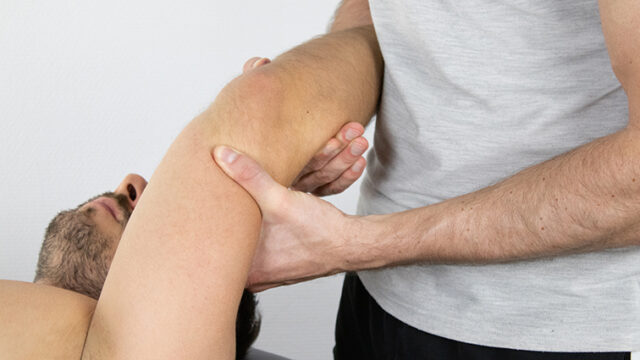 Although Camp et al. (2017) describe the posterolateral drawer test as the primary examination method and the most reliable and sensitive test for posterolateral rotatory instability, reliability, and accuracy studies are lacking. For this reason, we are giving this test a questionable clinical value.

To perform the test, have your patient in supine-lying position with the arms overhead and the examiner standing at the head of the table. The hand and wrist of the patient are fixated between the examiner’s upper arm and body leaving the forearm in neutral rotation. For the left elbow, fixate the humerus on its most distal part with your left hand with the thumb on the posterior surface over the triceps tendon. Grasp the forearm with your right hand with the index and middle fingers along the anterior aspect of the proximal radius and the thumb on the subcutaneous border of the ulna.

The patient needs to be relaxed for this maneuver, which is why a good explanation of the maneuver to the patient is crucial. To help the relaxation, various random pain-free movements can be made first that minimally stress the elbow. When the patient is relaxed, apply a posterolaterally rotatory force to the proximal radius with the fingertips of the right hand while holding the humerus stationary with the other hand. Subluxation is usually maximal between 20 to 40 degrees of flexion, but the test is repeated at various angles from 0 to 90 degrees to determine the maximum location of maximal instability.

If the patient is able to relax adequately, a slight valgus force can be applied during the test to amplify the degree of subluxation. . A positive test at a higher flexion angle of around 80-90 degrees is indicative of marked laxity of the posterolateral capsule and not just the LCL.