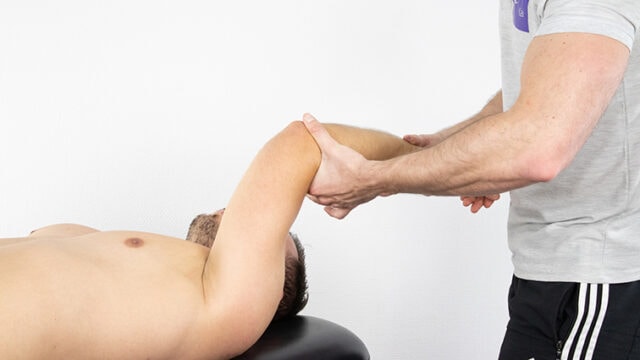 PLRI typically occurs as a result of a fall on the outstretched arm, generating an axial load, valgus force and an external rotational movement (torque) about the forearm with respect to the humerus. This causes the radial head and proximal ulna to subluxate posterolaterally away from the humerus in a rotatory fashion detaching or tearing the lateral collateral ligament complex in stage 1.In a more severe stage 2, the tissue disruption progresses anteriorly and posteriorly around the elbow to the medial side and in stage 3, the injury involves the medial collateral ligament or even the common flexor-pronator origin.

The execution of the lateral pivot shift test in the elbow is similar to the performance of the lateral pivot shift test in the knee. To perform the test, have your patient in supine-lying position with the arms overhead and the examiner standing at the head of the table. Start with the elbow in full extension and gently bring the forearm into supination by rotating the patient’s wrist. While slowly flexing the elbow, the Supination torque is progressively increased while a valgus torque at the elbow and an axial load along the forearm are added. Maximum subluxation usually occurs around 40 degrees of flexion, at which time the Supination is reduced and only a pure valgus torque is maintained.

This test is positive if a subluxation of the radial head is witnessed by a prominent bump on the posterolateral elbow and dimpling of the skin behind the radial head that occurs as the posterolateral capsule is pulled into the joint. With further flexion, the elbow reduces with a visible and palpable clunk. It is important to relax the Supination torque for reduction to occur without damaging the elbow.

As this test is usually impossible to perform in an awake patient, the test is rated positive if your patient experiences apprehension during the movement. The patient may verbalize that the joint felt as though it was about to dislocate, but an actual dislocation or subluxation does not occur. This test variation is called the Lateral Pivot-Shift Apprehension Test.