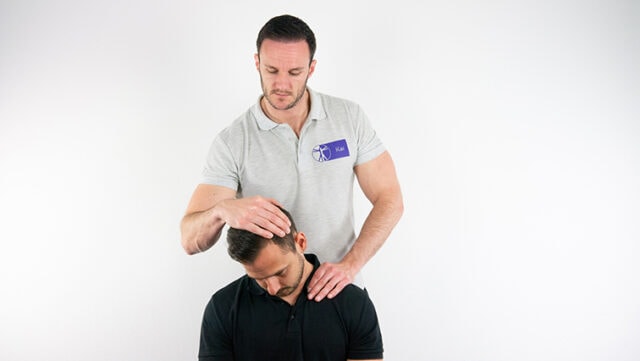 The Neck Tornado Test also known as Choi’s test is a new clinical test to assess for cervical radiculopathy.

Cervical radiculopathy is defined as pain in the upper extremities due to compression and/or irritation of a cervical nerve root. In 75% of cases, this is caused by a decreased height of the neural foramen due to cervical spondylosis. In the other 25%, a cervical nerve root can get compressed by a posterolateral disc herniation, which rather occurs in patients under the age of 50. The most accurate physical test to diagnose cervical radiculopathy is Spurling’s test which is commonly assigned a low to moderate sensitivity, but very high specificity.

Park et al. (2019) evaluated a new test, which they compared to Spurling’s test. They found a sensitivity of 85% and a specificity of 87% for the neck Tornado test also known as Choi’s test, which in this study was superior to the Spurling’s test. Although the results look promising, the study had a high risk of bias and these findings have yet to be confirmed by follow-up studies which is why we give this test a questionable clinical value in practice for now.

To perform the test, have the patient in sitting position and fixate his position with one hand. The examiner is standing behind the patient and applies light pressure to the patient’s vertex. With constant pressure, rotation is initiated starting with maximal flexion followed by lateral bending and full extension toward the direction of the pain site in a 180° tornadic pattern. This test is positive if the patient’s radicular pain or tingling is reproduced or aggravated in the ipsilateral shoulder or upper extremity.

The authors reason that the rather low sensitivity of Spurling’s Test can be explained by pressure that is only applied in one direction. For this reason, they came up with a test that aimed to apply compressive force at all angles by rotating the neck in a 180° tornadic pattern, while pressure is applied. What remains rather questionable is if ipsilateral shoulder pain should be rated as positive as this might also result in referred pain from compression of the cervical facet joints.

Other common tests to assess for cervical radiculopathy are: