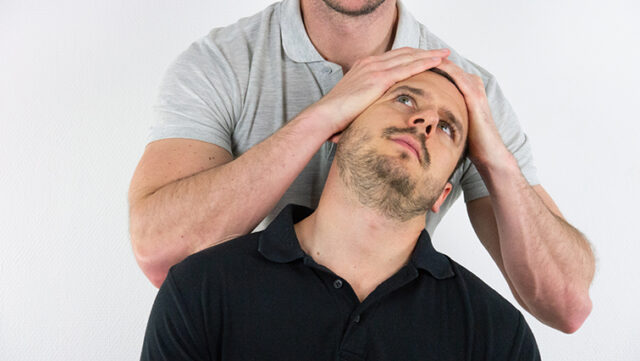 Spurling’s test is a test with a low sensitivity of 50% and a good specificity of 83% to diagnose cervical radicular syndrome according to Wainner et al. (2003). Several authors have shown that this test has a rather low sensitivity and a high specificity. For these reasons, we consider this test of moderate clinical value. However, there are several modifications of the Spurlings, which is why Anekstein has compared six different modifications with each other in their diagnostic study in the year 2011. Spurling’s test is a test designed to provoke the patient’s symptoms, which are usually neck pain with radiating pain or paresthesias down the arm. This is done by reducing the diameter of the intervertebral foramen, which causes symptoms in patients with cervical radicular syndrome.

According to the study results, the Spurling’s test is most provocative with the highest VAS score and most distally elicited pain with your patient’s neck in extension, lateral bending to the affected side, and axial compression.
It is important to elicit distal pain distribution to be able to distinguish between patients with actual radiculopathy and cervical spondylosis.
Other test versions were not able to distinguish between those groups as the pain was mostly experienced proximally in the neck.
However, this maneuver with extensions, lateral bending, and compression was the least tolerable, which is why you should gradually build up this test. So you should always start with just extension and lateral bending and only add axial compression if symptoms are not reproduced.

Other common tests to assess for cervical radiculopathy are: