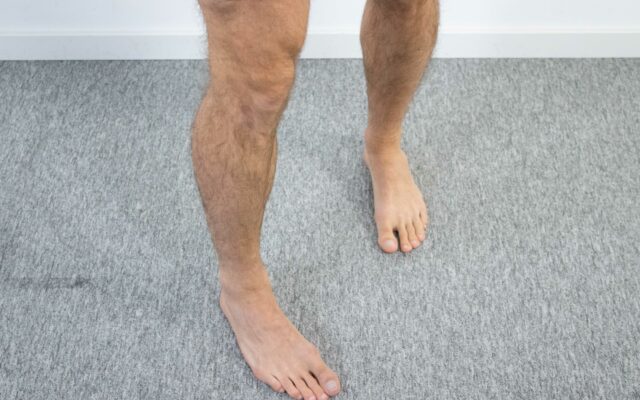 Current hip examination tests for femoroacetabular impingement (FAI) or hip instability are passive tests done by the examiner and may not reproduce activity-related symptoms. Therefore, Ranawat et al. (2017  proposed the foot progression angle walking test. In their diagnostic study, the test was evaluated alongside the FADIR test for FAI and FABER test for hip instability and yielded a sensitivity of 61 % and specificity of 56% in the assessment of FAI as well as a sensitivity of 67% and specificity of 70% for hip instability, that translates to rather poor likelihood ratios and which is why until further validation occurs we also attribute a weak clinical value to this test.

To conduct the test the patient is asked to walk as they normally do so with a neutral foot angle. Then the patient is instructed to perform internal foot progression angle walking, so the leg is internally rotated. This to about 15° from their neutral gait.

This is followed by subsequent external foot progression angle walking.

The test is positive if pain is elicited with increased foot progression angle or if baseline pain is exacerbated.

This dynamic assessment aims to reproduce or exacerbate symptoms by gait manipulation. Using FPAW, foot progression is modified by internal or external rotation, which translates to directed forces across the hip that modify or exacerbate symptoms. The abutment of the head-neck junction with internal rotation would presumably be linked to symptomatic gait in patients with FAI, which coincided with their finding of a positive internal FPAW in the study group confirmed to have FAI morphology. In contrast, patients with symptomatic hip instability exhibited a positive test with external FPAW, which may reproduce instability or symptoms of under coverage.

Other common orthopedic tests to assess for FAI and/or labrum tears of the hip are: