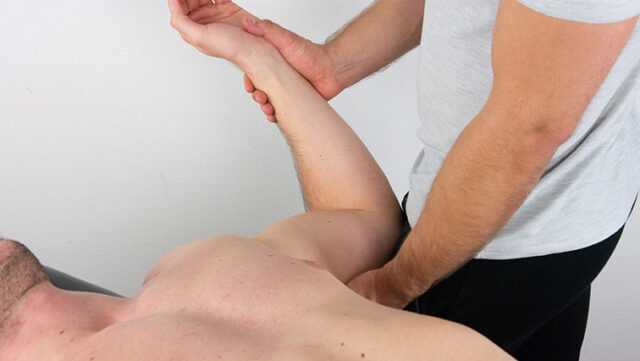 To conduct the test, the patient is in supine position with the side to be examined close to the edge of the bench. The patient’s shoulder is then brought into 90° of abduction. The patient is instructed to voice any apprehension or fear of subluxation to the examiner during the test. Subsequently, the examiner carefully brings the shoulder into more and more external rotation and is going to look for signs of apprehension by the patient.

In a positive test, the patient reports fear of luxation at greater ranges of external rotation.

Biomechanically it makes more sense to horizontally abduct the patient’s arm to have the head of the humerus glide anteriorly.

The test is used when the patient has reported apprehension during the apprehension test. So the fear of subluxation when the patient’s arm is brought into 90° of abduction and added external rotation. There the examiner gives an anterior-to-posterior (AP) directed pressure at the humeral head.

The test is considered positive when the patient’s fear of luxation is reduced after the AP pressure is applied.

Other common tests to assess anterior glenohumeral joint instability are: