Psychosocial Awareness in the Management of Patellofemoral Pain

Patellofemoral pain, (PFP) has historically been approached in a very biomedical way. After all, it’s looking at pain arising from a joint and if the load on that joint is affected by biomechanics. So why should we bother with psychosocial considerations and what do we know about these in the PFP field?

When research started around PFP in the 1980’s most attention was placed on the VMO. A plethora of research led to inconclusive results around VMO anatomy, function and firing. The 1990s and into the 2000s saw focus turn to proximal structures and the role of pelvic and femoral position and control. Alongside this, there have been publications on the role of the foot, muscle length, trunk activation, and more recently running technique. External factors have been researched looking at load, footwear, stair load, etc. All useful, all informative but all very, very biomedical.

The silence around psychosocial considerations was deafening. The research culture was housed around 3D camera systems, force plates, and EMG and it was very difficult to persuade those in positions of influence to embrace qualitative areas of research embracing the exploration of psychosocial topics. I had my crepitus research rejected for publication on the grounds of being, ‘of insufficient interest to the readership’ and similarly rejected to present at the Patellofemoral Research Retreat whilst alongside it my anatomy research on the architecture of the vmo was happily accepted to both. How off the mark these decision-makers at the time were. You cannot argue with the 1.1 Million views that the Physiotutors have received on their video about crepitus and their work!!

I am glad to say that there is a sea change in the last 10 years. Ben Smith has done fabulous work on the lived experience of patients with PFP, highlighting the significant detrimental effects on patients’ lives. In parallel, my work and others since have shown the negative beliefs around crepitus and how patients alter their behavior based on these beliefs.

Kinesiophobia is a fascinating area that is emerging and we can see from the literature that altered poor movement is often driven more by kinesiophobia than weakness. And for those of you who like numbers all is not lost. There are now some super-validated outcome measures that are being used to measure catastrophization, kinesiophobia, and fear-avoidance.

I also love the recent work from the UK on depression and anxiety rates in the PFP population. And yes, to clarify, way higher than an age-matched population.

Let’s face it you can have the fanciest testing equipment, and the most elaborate exercises but if the patient doesn’t engage with them because of their beliefs, their fear-avoidance, anxiety, or whatever you have identified it’s a waste of everyone’s time.

We need to increase psychosocial awareness in patellofemoral pain and look for a blended approach and I hope you will see in my teaching that this is exactly what I aspire to.

Wride J, Bannigan K. Investigating the prevalence of anxiety and depression in people living with patellofemoral pain in the UK: the Dep-Pf Study. Scandinavian Journal of Pain. 2019 Apr 1;19(2):375-82.

Robertson CJ, Hurley M, Jones F. People’s beliefs about the meaning of crepitus in patellofemoral pain and the impact of these beliefs on their behaviour: a qualitative study. Musculoskeletal Science and Practice. 2017 Apr 1;28:59-64.

Bethel J, Killingback A, Robertson C, Adds PJ. The effect of stretching exercises on the fibre angle of the vastus lateralis and vastus medialis oblique: an ultrasound study. Journal of Physical Therapy Science. 2022;34(2):161-6. 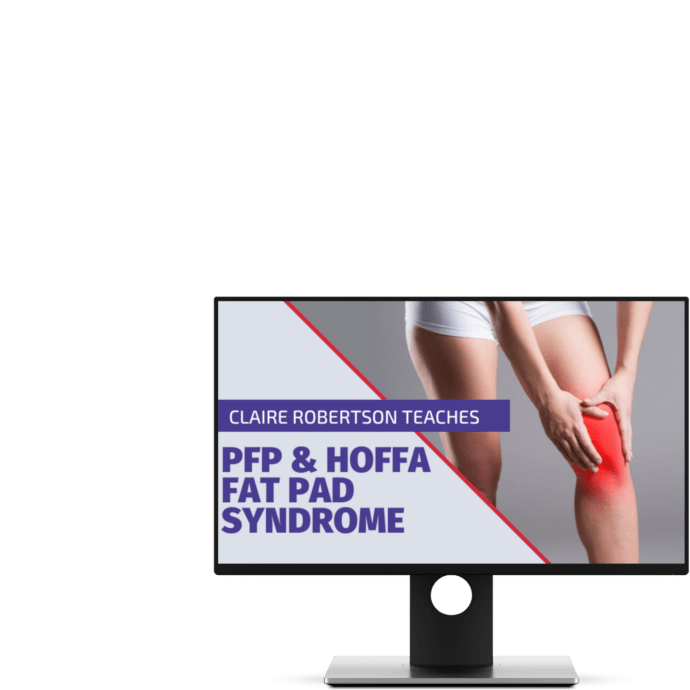