Hardly any musculoskeletal topic has received as much media coverage as herniated discs and probably every person knows some family member or neighbor who has had one. At the same time, a lot of misconceptions have been spread about the topic and a lot of patients suffering from low back pain fear that they herniated a disk. We’ve decided to aggregate the research surrounding lumbar disc herniations to separate facts from fiction:

Anatomy of an intervertebral disk

An intervertebral disc consists of strong fibrocartilage designed for shock-absorption and is firmly anchored into the vertebral bones above and below by the vertebral end plates. Furthemore, it is surrounded by strong ligaments, so there is absolutely no way a disc can slip.

Herniations are broadly defined as a localized or focal displacement of disc material beyond the limits of the intervertebral disc space. The disc material may be the nucleus, cartilage, fragmented apophyseal bone, annular tissue, or any combination thereof. First of all, the presence of disc tissue extending beyond the edges of the ring apophyses, throughout the circumference of the disc, is called ‘‘bulging’’ and it’s not considered a form of herniation.

There are 3 categories of disc herniations: We are talking about a disc protrusion if the greatest distance between the edges of the disc material presenting outside the disc space – so the D-line- is less than the distance between the edges of the base of that disc material extending outside the disc space, which is presented by the B-line.

In an extrusion, the D-line is bigger than the B-line:

And in a sequestration – which is a subclass of a disc extrusion -the extruded disc material has no continuity with the disc of origin:

It’s important to realize that disc protrusions are very common, also in healthy people. A famous study by Brinjikij et al. (2015) showed that almost one third of healthy 20-year-olds have a disk protrusion. The numbers increase with age up to 43% at the age of 80, so almost every second person without low back pain has a herniated disk. Disk bulges are even more common by the way with 84% at the age of 80. So even if your MRI scan does show a bulging or protruding disc you should realized that these findings are completely normal and much like “gray hair from the inside”. Pain is complex and cannot be explained by an MRI scan alone.

What are risk factors to suffer from a lumbar disk herniation?

Let’s see what the evidence says about risk factors to be hospitalized due to a lumbar disk herniation irritating a nerve root:
In a chinese study Zhang et al. (2009) report that family history so genetic predisposition was by far the biggest risk factor. This was followed by lumbar load at work and strenuous work, while regular physical exercise and sleeping on a hard bed were both protective. Furthermore, a study in Swedish construction workers (Wahlström et al. 2012) and two systematic reviews with meta-analysis revealed that smoking (Huang et al. 2016), obesity and overweight (Shiri et al. 2014) as well as being taller than 1 meter 90 or 6 foot 3 are further risk factors.
An interesting literature review by Belavy et al. (2016) showed an increased risk for lumbar disc herniations in astronauts after return to earth. They concluded that the most likely cause thereof was a swelling of the intervertebral disc in the unloaded condition. Conclusion: Intervertebral disks need load to stay healthy. Not surprisingly, studies from Bowden et al. (2018) and Belavy et al. (2017) also show that physical activity, particularly vigorous activity, and running are beneficial to maintain intervertebral disc health.

What is the course of a symptomatic disk herniation?

Okay, so let’s say you or your patient are one of the unlucky ones who experience sciatica from a herniated disc pressing on a lumbar nerve root. How long does this take to heal? In a Dutch study by Vroomen et al. (2002), 73% of patients showed major improvement at 12 weeks without surgery. On long-term Konstantinou et al. (2018) found a less positive course with 55% of patients reporting improvement of sciatica after 12 months.
For some reasons, a lot of patients assume that having a disc herniation is something they will have to live with for the rest of their lives. However, a study by Elkholy et al. (2019) followed 9 patients with lumbar disc herniations and sciatica. Spontaneous resorption of the herniated disc was found in ALL patients in a mean time of around 9 months, while they recovered way earlier with a mean of roughly 6 weeks. This shows again that you can recover although you still have a hernia, so structure is just one component of many influencing someone’s pain experience. By the way, larger and/or sequestrated discs were associated with an even faster resorption. A meta analysis from Zhong et al.(2017) confirms these findings showing that spontaneous resorption was reported in 66% of patients across eleven different studies.

So a herniated disc and sciatica do not necessarily mean that you need to get surgery. In the Netherlands about 5-15% of patients with lumbosacral radicular syndrome end up getting surgery (NHS Standaard Radiculair Syndroom). But how effective is surgery? A systematic review by Jacobs et al. (2011) showed that conservative treatment and surgery are equally effective after 1 and 2 years. The only advantage that surgery might offer is a faster pain relief for patients with 6-12 weeks of radicular pain. However, other options for pain relief should be considered first such as NSAIDs, weak opioids or epidural injections, like the NICE guidelines from the UK suggest.
While surgery or just time usually improves a patient’s leg pain, a lot of patients we see do not improve their back pain. Probably the main role for us as clinicians in these cases is education and re-assurance (possible by showing them this blog article) and by helping patients to regain confidence in their backs. This can be done be achieved with a graded activity or graded exposure programs to challenge specific movement-related fears such as bending over. If you need some inspiration for that, check out our video below.

Alright, this was our posts on facts and fiction around lumbar disc herniations. Comment down below if you still have any questions or if you were surprised about actual evidence around a couple of persistent myths. A lot of this information and much more can be found on our online course on the spine. 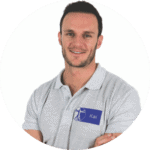 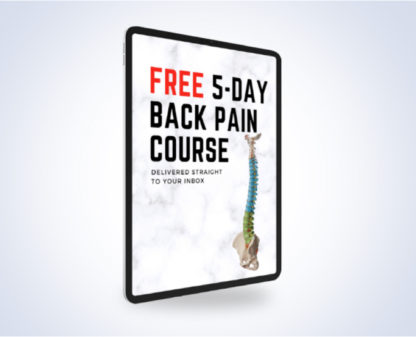