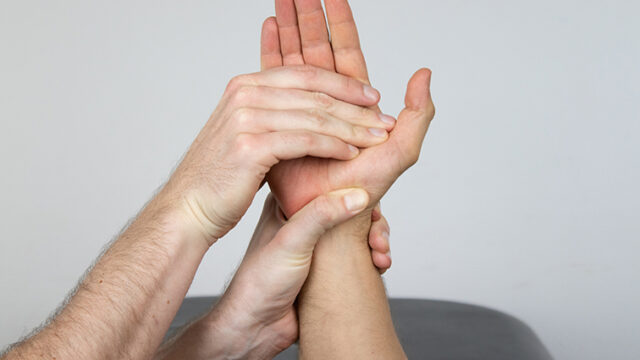 The scapholunate ligament is a strong ligament between the scaphoid and the lunate and an important stabilizer of the wrist. It can be injured by a fall or a sudden load on the wrist and can occur together with a distal radius fracture or a carpal fracture. When untreated an SL tear can lead to a so-called DISI which stands for dorsal intercalated segmental instability, which is a dissociation of the scaphoid and lunate.

To perform the Watson Test your patient is in sitting position with his elbow supported on the treatment bench and facing the examiner. Then fixate your patient’s radius with one hand and give pressure on the palmar prominence of the scaphoid with your thumb into dorsal direction. The other hand grasps the patient’s metacarpals from the ulnar side to control the wrist position.
Start in ulnar deviation and slight extension. In this position, the long axis of the scaphoid is nearly in line with the axis of the radius.
Then move the wrist into radial deviation and slight flexion, while you keep the pressure on the scaphoid. Because the scaphoid wants to move into flexion with radial deviation, the oppositional force of the thumb will cause it to shift or subluxation in dorsal direction in case of an SL ligament rupture. When the pressure of the thumb is released, the scaphoid often shifts back in palmar direction with a “thunk”.

So this test is positive for an SL ligament rupture if such a thunk can be felt or heard or if it reproduces the patient’s familiar wrist pain on the dorsal side.
In a healthy wrist, the movement into radial deviation will either just be limited, or the scaphoid just pushes the thumb away in palmar direction.