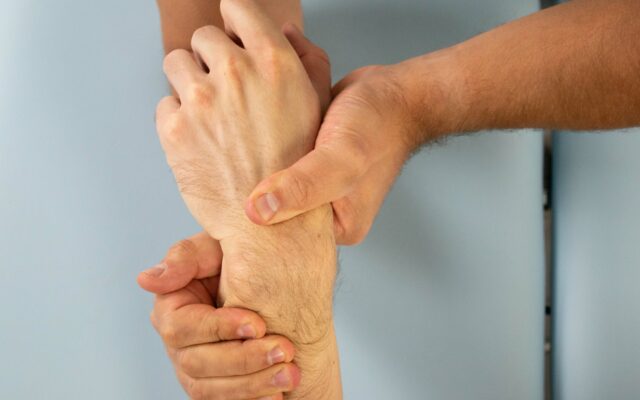 The Midcarpal Test / MC Test is an orthopedic test to assess the arcuate ligament, also known as the deltoid or V-ligament in the wrist.

Palmar midcarpal instability is characterized by kinematic dysfunction of the proximal carpal row due to damage to the arcuate ligament, also known as deltoid or V-ligament. It is referred to as a V, as it appears as such on MRI. Granted, it’s an inverted V joining the proximal and distal carpal rows. While most commonly the SL ligament and TFCC are affected in wrist ligament injuries, the wrist is a complex region and requires a thorough assessment as missed ligament injuries may result in persistent pain, instability, and reduced grip force and range of motion and could lead to, early, osteoarthritis.

Prosser et al.  (2011) evaluated common provocative wrist tests on their diagnostic accuracy when compared to the gold standard which is wrist arthroscopy. They report a positive likelihood ratio of 2.67 which at most makes a positive test result mildly useful in the diagnosis. As that’s the only value reported in the study and no further statistics are available, we give it a weak clinical value.

To conduct the test the patient sits in front of the therapist with the arm placed on the examination table and the wrist in radial deviation. We will demonstrate the test on the patient’s right wrist. So the right hand of the patient is grabbed with your right hand so that your thumb is positioned over the dorsal distal capitate region of the patient’s wrist. Then, exert a palmarly directed force onto the subject’s wrist so that the carpal bones translate in palmar direction. This adds stress to the arcuate ligament.

The wrist is then moved into ulnar deviation while maintaining the palmarly directed pressure.

The test is considered positive when the test recreates a painful clunk as the wrist moves from radial to ulnar deviation.