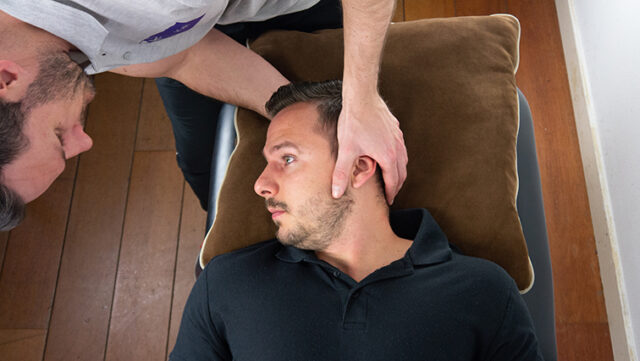 In this post you will learn how to perform the Supine Head Roll test also called Pagnini-Lempert test or Pagnini-McClure Roll Test to diagnose benign paroxysmal positional vertigo from the lateral semicircular canals.

Around 20% of BPPV cases are said to resolve within 4 weeks and up to 50% up to 3 months without treatment, but recurrence is reported between 10-18% after 1 year.BPPV from the lateral semicircular canal tends to self-resolve more quickly than posterior BPPV. If the patient has a history compatible with BPPV and the Dix-Hallpike test exhibits only horizontal or no nystagmus, the clinician should perform a supine head roll test to assess for lateral, also called horizontal semicircular canal BPPV. Before you conduct the test, the patient should be counseled that his symptoms of vertigo will be reproduced and that he might feel nauseous. So make sure you have a bucket at hand, in case your patient might need it.

To perform the Supine Head Roll test have your patient lie supine on the treatment bench and bring his head into 30 degrees of flexion to align the lateral semicircular canal in the horizontal plane. Then quickly rotate 90 degrees to one side and observe your patient’s eyes for nystagmus, which usually has a latency of 5-20 seconds and fatigues within 60 seconds afteronset. After the nystagmus subsides (or if no nystagmus is elicited), the head is then returned to the straight faceup supine position. After additional elicited nystagmus has subsided, the head is then quickly turned 90 degrees to the opposite side and the eyes are once again observed for nystagmus

In a positive test, the patient will experience vertigo during this test. In the case of lateral semicircular canal BPPV the nystagmus will be predominantly horizontal. Two potential nystagmus findings might occur:– Geotropic type of nystagmus is marked by a very intense horizontal nystagmus beating towards the earth on the affected side and usually less intense beating to the earth on the healthy side. It seems probable that in this form of nystagmus the calcium carbonate debris is located in the long arm of the semicircular canal– Or Apogeotropic type: Less common with horizontal nystagmus beating towards the uppermost ear on both sides. In this case, it is reasoned that the calcium carbonate debris is located adherently or close to the ampulla of the semicircular canal. In this case, the side opposite the strongest nystagmus is the affected ear.

Other common tests for BPPV are: