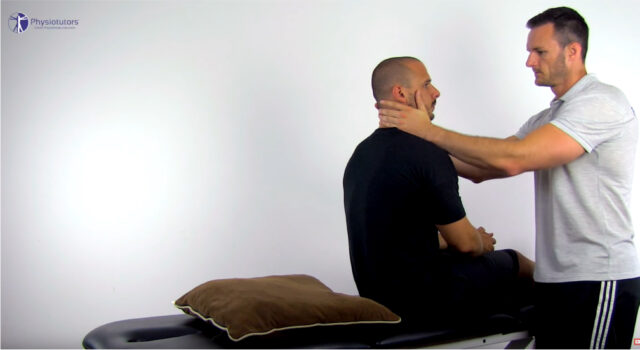 To perform the Dix-Hallpike test have your patient sit on the treatment bench in long-sit with a pillow on the table that will make sure that the patient’s head is extended to 20° in a second. Stand on the side to be examined and firmly hold your patient’s head in 45 degrees of rotation towards the side to be tested. In this case, the left posterior semicircular canal of the patient is aligned with the Sagittal plane.

Instruct the patient to keep his eyes open and take the patient backward in a quick movement so that your patient’s head is still rotated and extended to 20° by the pillow.

Observe the patient’s eyes for the latency, duration, and direction of the nystagmus.
The nystagmus typically usually has a latency of around 5-20 seconds and fatigues within 60 seconds after onset. In a positive test the patient will experience vertigo during this test.

In the case of posterior canal BPPV the nystagmus will be upbeating and torsional, meaning that the upper pole of the eye is beating towards the dependent ear and the vertical component beating toward the forehead.

If the initial result is negative, the Dix-Hallpike test should be repeated for the other side.
If the nystagmus presented with a lateral beat or a downbeat, lateral or anterior BPPV should be suspected. On top of that, If you suspect BPPV in your patient and this maneuver is negative in both directions, you should assess the lateral canal with the Supine Head Roll test (see below).

The anterior canal is rarely affected with 1-3% of all BPPV cases and its pathophysiology is poorly understood. In these cases, you should refer to a specialist.

Other common tests for BPPV are: