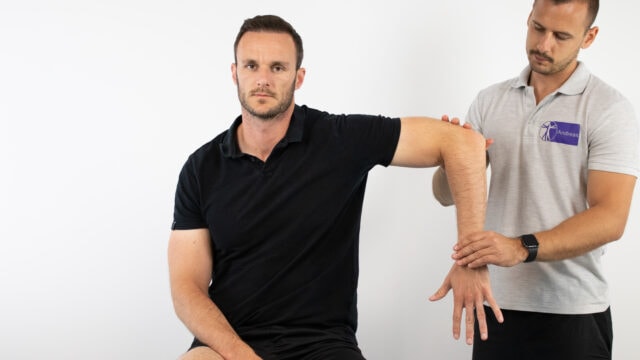 The Shoulder internal rotation test was proposed by Ochi et al. (2011) as an alternative to the elbow flexion test that we have previously discussed in another video. In their study, they evaluated 25 patient cases with cubital tunnel syndrome and found a sensitivity of 80% and specificity of 100%. However, while those values appear promising, the test was also applied in asymptomatic individuals and has yet to be validated in other studies, which is why we give it a moderate clinical value.

To conduct the test the patient is in sitting or standing position. The arm is brought into 90 degrees of abduction, full internal rotation and 10° of shoulder flexion, as well as the elbow flexed to 90°. The hand is in neutral position with the fingers extended.

The test is considered positive if any slight symptoms attributable to cubital tunnel syndrome that are consistent with the patient’s complaints or discomfort in the ulnar nerve distribution are reproduced or aggravated within 10 seconds.

Other orthopedic tests to assess for cubital tunnel syndrome are: