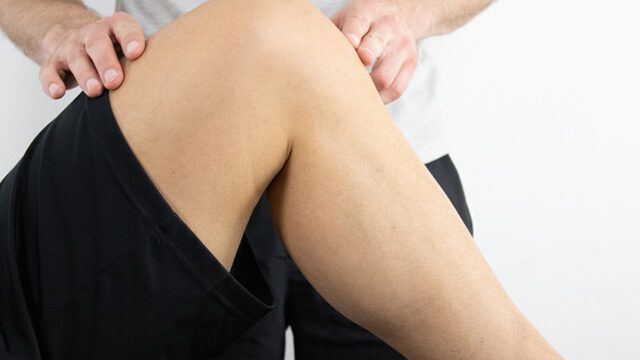 The Posterior Sag Sign, also known under the names of Godfrey’s Test or Step-Off Test is a common orthopedic test to assess the integrity of the posterior cruciate ligament.

The prevalence of PCL injuries remains unknown, also due to the fact that a PCL tear often goes undiagnosed. The most common causes of PCL tears are due to dashboard traumas, a fall on the on the anterior proximal aspect of the tibia with a flexed knee, or hyperextension injuries. According to a study by Rubinstein et al. (1994), the Posterior Sag Sign has a sensitivity of 79% and a specificity of 100%. Although Rubinstein was the only study that evaluated the specificity of the posterior sag sign, it seems that this test has a good clinical value to confirm PCL tears.

In order to perform this test have your patient in supine lying position with the hip flexed to 45° and the knees flexed to 90°. While your patient is encouraged to completely relax his quadriceps, the affected knee is viewed from the side.

This test is positive for a torn PCL if the step between the tibia which usually extends 1cm anteriorly in relation to the femur is lost. For this reason, this test is also known as the step-off test.

This test can easily be progressed into Godfrey’s Sign, for which a posterior sag is noted in case of a torn PCL tear when the patient’s hips and knees are flexed to 90° and to the patient’s heels supported by the examiner. In this test, the posterior sag becomes more prominent due to gravity which pulls the tibia even more posteriorly.

Other common tests to assess PCL tears are: