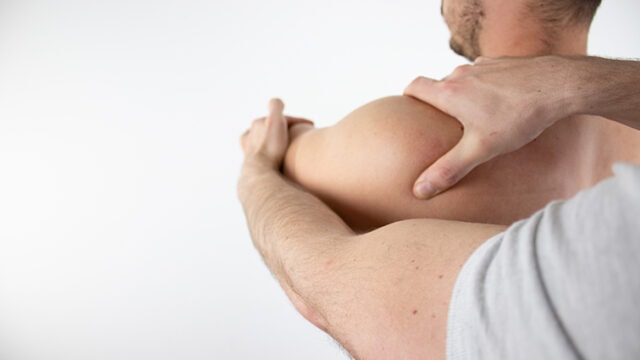 Morey et al. (2016) introduced the Porcelli Test as a new test in the diagnosis of posterior labral tears. In their study, they found a high inter-examiner reliability above point 8 and a very high accuracy with a sensitivity of 100% and a specificity of 99% in the diagnosis of posterior labral tears. In this study, the Porcelli test outperformed other common tests like the Jerk, Kim’s and Load-and Shift test. Although this test seems to be reliable and highly accurate, this test has not been validated by other studies yet. For this reason, we are giving it a moderate clinical value to in and exclude posterior labrum tears.

To perform the Porcelli test, have your patient sitting or standing. Similar to the Active Compression Test, the patient brings his shoulder into ninety degrees of flexion and ten to fifteen degrees of adduction with the shoulder in maximal internal rotation, so that the patient’s thumb is pointing downward. The examiner is standing behind the patient and stabilizes the scapula with one hand. Then the patient is asked to elevate his arm against resistance applied by the examiner.

Pain and strength are noted by the examiner.

In the second part of this test, the patient assumes the exact same position as in the first part. Only now, the examiner moves the thumb of his stabilizing hand more laterally so that it is placed onto the posterior joint line, thereby maintaining a moderate anterior force in order to prevent the humeral head from subluxation posteriorly. Then the maneuver is repeated.

This test is positive if pain with or without weakness noted during the first part of the test is reduced or eliminated during the second part. If the pain persists in the second maneuver as well, then it suggests AC joint pathology.

The biomechanical reasoning that the authors provide for this test is that maximum posterior capsular tension applies a compressive force on the torn labrum in a position of forward flexion, adduction, and internal rotation. In active elevation against resistance, the line of pull of the deltoid causes posterior translation of the humeral head causing further compression of the torn labrum. Morey et al. (2016) also confirmed this anatomical base of the test under radiographic imaging. They found that the humeral head translated more posteriorly in patients with a torn posterior labrum compared to healthy control during the first stage of the test. In the second stage, radiographs showed the examiner’s thumb was able to prevent posterior translation.

Other common orthopedic tests to assess posterior instability of the glenohumeral joint are: