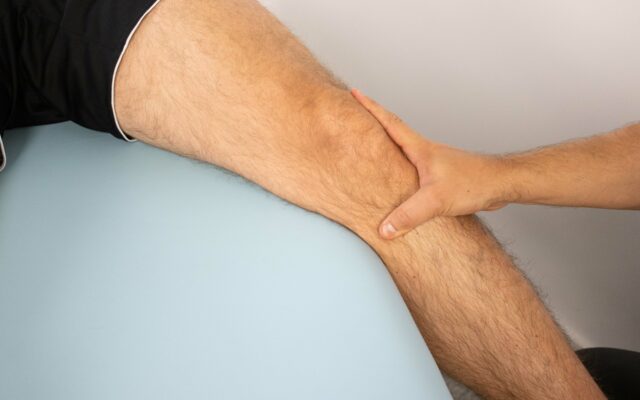 Patellar dislocation can have several underlying anatomical factors including but not limited to abnormal bony anatomy of the trochlea and patella, mechanical misalignment of the lower limb as well as static and dynamic deficiency of soft tissue stabilizers. The traditional patellar apprehension test as well as CTs or MRI may fail to detect patients with patellar instability due to its static nature – especially outside of an acute event or if the patella failed to self-reduce.

Ahmad et al. (2009) proposed the moving patellar apprehension test to functionally mimic an actual dislocation or instability episode of the patella. In their diagnostic cohort study, they found an overall accuracy of 94.1% with a sensitivity of 100% and a specificity of 88.4%. The study has several limitations that for example exclude patients with symptomatic subluxations rather than frank dislocations and the test has not been validated in other studies which is why we give it a moderate clinical value.

To conduct the test, the patient is in supine lying position with the lower leg hanging over the edge of the bench. In the first part of the test, the leg is in full extension and the examiner uses the thumb of one hand to translate the patella laterally. Then the leg is moved into 90° of flexion and the examiner notes any signs of apprehension orally expressed by the patient or quadriceps contraction in an attempt to stop flexion and/or to dynamically reposition the patella. It is then brought back to full extension while the lateral translation is maintained.

In a second step, the knee is again in full extension and now the examiner uses the index finger to medially translate the patella as far as possible. The knee is then flexed to 90° and elimination of apprehension and quadriceps contraction is noted.

In order for the test to be considered positive, both steps of the test have to be positive.

In the second part of the test, with medial force on the patella as the knee is flexed, the symptoms of impending dislocation are eliminated because the patella engages the trochlea in a normal fashion. The manual translation of the patella reproduces the function of the deficient and/or incompetent MPFL. The test is a combination of apprehension in part 1 and the reduction of apprehension in part 2. This dynamic, provocative test is similar in concept to the pivot-shift test for ACL insufficiency in the knee, the release test for anterior shoulder instability, and the moving valgus stress test for valgus instability of the elbow. All tests, which you can also find here on our channel.

Another orthopedic test for patellar luxation / patellar instability is the patellar apprehension test.