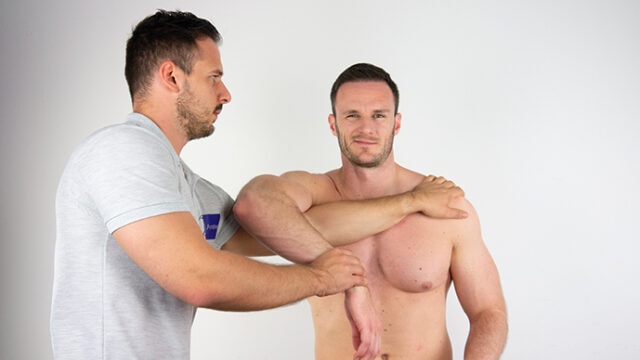 In the 1970s and 80s Neer coined the term “subacromial impingement syndrome”. According to his theory, impingement occurs on the tendinous portion of the rotator cuff by the coracoacromial ligament and the anterior third of the acromion. We have an elaborate video on this topic, that you can check out later by a click on the link in the top right corner.

According to Reviews by Hegedus et al. (2012) and Gismervik et al. (2017), the Hawkins-Kennedy test has a sensitivity of 58-80% and a specificity of 56-67%.
Furthermore, Cadogan et al. (2011) evaluated the test’s reliability and found an inter-rater reliability of 0.38 which is why we give it a weak clinical value as a stand-alone test.

To perform the Hawkins-Kennedy test according to its original description, have the patient in sitting position with the affected arm in ninety degrees of shoulder flexion and the elbow flexed to ninety degrees. Then fixate the scapula with one hand, hold on to the patient’s elbow with the other hand and add passive internal rotation to the glenohumeral joint.

The test is considered positive in case of the reproduction of the patient’s familiar shoulder pain.

Other common test for subacromial pain syndrome (SAPS) are: