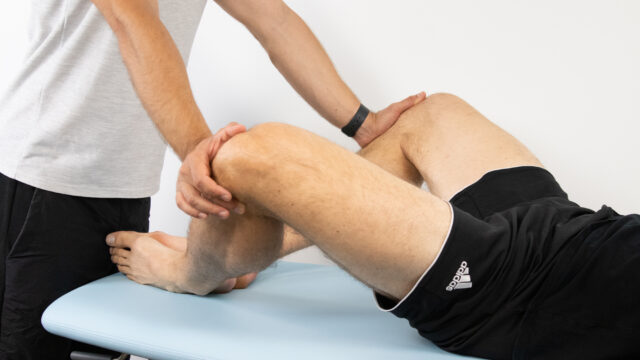 Posterolateral corner injuries of the knee commonly occur together with other ligament injuries in the knee joint. Rarely are they seen as isolated injuries but can occur as a consequence of ACL injury reconstruction failure. On our page, you will find two other common tests for the PLC, which are the Dial test and Reverse pivot-shift test.

Gomes et al. (2016) proposed the Frog Leg Test to assess for posterolateral knee instability. They compared the test with the standard varus stress test as well as MRI imaging. In their study, they found a sensitivity of ninety-one point seven percent and specificity of ninety-four point 5 percent as well as an inter-rater kappa of 0.86. These values have not been confirmed yet by other studies and reviews and there is an interesting comment on the test that we will discuss after the test demonstration. Therefore we give this test a moderate clinical value for now.

Now to conduct the test, the patient lies in supine position and the legs are placed in a frog position. So both knees are flexed to 90° and the foot soles touch each other. Then the hypothenar eminence of both hands is placed on each anteromedial aspect of the tibia.

The middle finger of each hand can then palpate the Lateral Collateral Ligament, joint line, and posterolateral corner.

Then the examiner applies a varus force to both knees simultaneously and palpates for differences in lateral compartment gapping. The test is considered positive if there is a noticeably palpable difference on the affected side compared to the non-affected side.

Norris et al. (2017) commented on the test in a letter to the editor. They argue that while the test position may exert load on the lateral collateral ligament, it may not suffice to also assess the posterolateral corner. From a biomechanical point of view, in order to stress the popliteus tendon and popliteofibular tendon, the tibia has to be externally rotated. They go on to state that the frog leg test position, with the femur in external rotation, will lead to relative internal tibial rotation and thus the PLC structures cannot be accurately assessed. While the test can be a good way to assess the integrity of the lateral collateral ligament, which is an integral part of the PLC, they mention that intraoperatively, PLC injuries can occur without the involvement of LCL injuries and may therefore be missed by the test.

Other orthopedic tests to assess the posterolateral corner of the knee joint are:

Gomes JL, Leie MA, Ramirez E, Gomes TE. Frog-leg test maneuver for the diagnosis of injuries to the posterolateral corner of the knee: A diagnostic accuracy study. Clinical Journal of Sport Medicine. 2016 May 1;26(3):216-20.

Norris R, McNicholas MJ. In Response to: Frog-Leg Test Maneuver for the Diagnosis of Injuries to the Posterolateral Corner of the Knee: A Diagnostic Accuracy Study. Clinical Journal of Sport Medicine. 2017 May 1;27(3):e33.