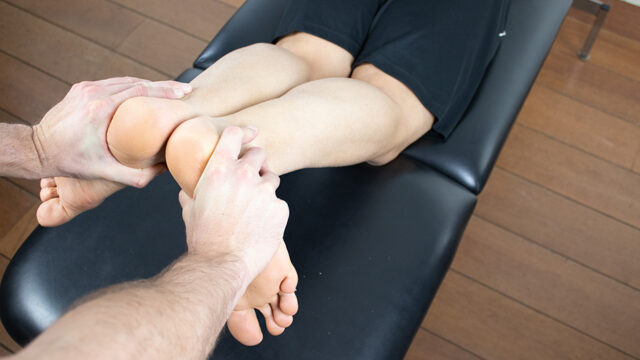 The posterior lateral corner abbreviated as PLC is a complex area, which involves many structures, of which the lateral collateral ligament, the popliteus tendon, and the popliteofibular ligament are said to be the most important stabilizers.

PLC injuries often happen due to direct blows to the anterior medial knee, hyperextension, or non-contact varus stress injuries, and often occur together with ACL or PCL tears, with only 28% of PLC tears in isolation.

The dial test is a common test to diagnose PLC injuries and to distinguish them from posterior cruciate ligament tears. According to Krause et al. (2013), the dial test has intratester reliability of 0.83 to 0.89 and inter-tester reliability between 0.74 and 0.83 in healthy persons if a handheld inclinometer is used. The validity of this test is unknown, which is why we cannot make any recommendations regarding its clinical utility.

This test can be performed in supine prone and sitting positions, but the original version described by Cooper et al. is in prone position.

So first flex your patient’s knees to 30° and bring his ankles into maximal dorsiflexion, to limit rotation at the ankle. Then place both of your hands on the feet of the patient cup the heels and place your fingers and thumbs, alongside the talocalcaneal contours.

Now maximally externally rotate the heels and measure the foot thigh angle and compare both sides.

In the second part of this test flex your patient’s knees to 90°and repeat the same process.

A side difference of at least 10 degrees has been considered significant. Isolated PLC injury is diagnosed if there is greater than 10 degrees of external rotation versus the contralateral side at 30° of flexion, but not at 90° as an intact posterior cruciate ligament will restrain rotation at 90°.

If an external rotation greater than 10° compared to the other side is found in both 30° and 90° of knee flexion both a PLC and a PCL injury are suspected.

Other orthopedic tests to assess the PLC are: