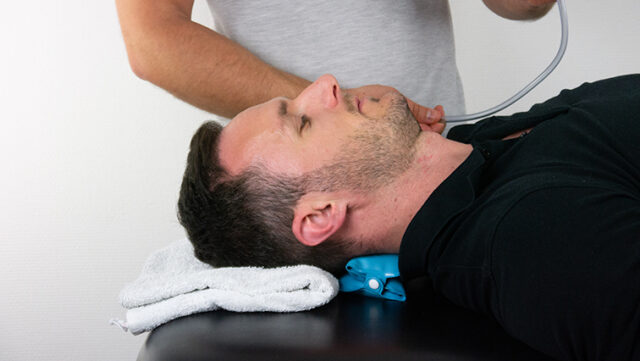 Evidence suggested that deficits in neck muscle strength, coordination, and endurance are associated with neck pain and headache patients – specifically those with cervicogenic headache.

De Koning et al.(2008) conducted a systematic review of the clinimetric properties of among others the craniocervical flexion test, abbreviated as CCFT. They found ICC values of point-sixty-five to point-ninety-three for the intra-observer reliability. One study reported values for the inter-observer reliability with an ICC of 0.54. Based on these inconsistent results the clinical value is rather weak.

To conduct the test, the patient lies in supine crook lying position with the head in neutral position. The line of the face should be horizontal. The deflated biofeedback unit is then positioned behind the neck so that it abuts the patient’s occiput.
Inflate the cuff to a baseline pressure of 20mmHg.
Then, the test is performed in two stages.

For stage 1, the patient is asked to slowly perform a head nod as if the back of their head was sliding up the bench until they reach a pressure increase of 2mmHg so from 20 to 22mmHg, and to hold this position for two to three seconds before they can relax and return to the starting position.
In case your patient has an apical breathing pattern, the nod is performed on exhalation.
Repeat this process for each 2mmHg increment until you reach 30mmHg on the biofeedback unit. This totals 5 stages.
The stage that the patient is able to achieve and hold the pressure for 2 to 3 seconds with correct craniocervical flexion is the baseline measure.

During the test, you are going to observe for the following to ensure that the test is conducted properly:
Analyze the motion of the head nod. With each stage, there should be an increasing angle of rotation. Patients might use more of a head retraction or lifting of the head in order to achieve pressure increase. Furthermore, there should be a minimal palpable activity of the sternocleidomastoid or anterior scalene muscles until the last 1 or 2 stages of the test – if at all.
Also, the patient should be able to relax and return to the baseline pressure of 20mmHg between attempts.

Stage 2 is performed if the patient is able to achieve stage 1 of this test without substitution movements.
In this stage, you are going to test the isometric endurance of the deep cervical flexors. The patient is in the same position as in stage 1. Then they perform the head nod to the lowest level, so 22mmHg, and hold this position for 10 seconds. If they are able to perform 3 ten-second holds at that level, they can continue to the next level, which is again 2mmHg higher.

You will check for the previously described compensatory strategies as well as jerkiness during the hold or a reduction of pressure during the 10second isometric contraction, which may indicate weakness or fatigue of the deep cervical flexors.

In your evaluation, document the pressure level that the patient can hold steady for repeated 10-second holds with minimal superficial muscle activity or other compensatory strategies.

Other common tests to assess for a cervical motor control impairment are: