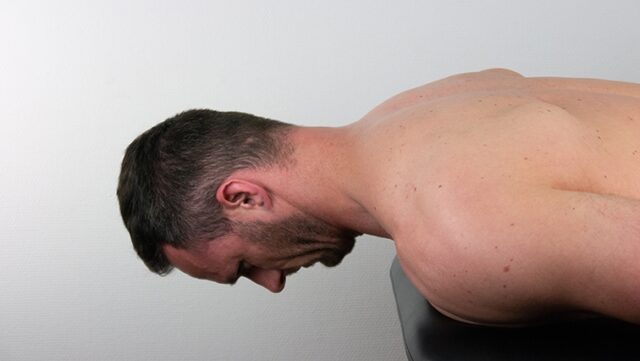 With the patient lying prone and head and neck past the edge of the table and the cervicothoracic junction stabilized, ask the patient to sustain a chin tuck position in neutral for 20 seconds. A positive finding for the weakness of the deep neck extensors is the ‘chin length’ increasing with neck extension, as observed on the inclinometer, indicating a dominance of the superficial extensors of the neck.

Weakness of both deep and superficial neck extensors (global weakness) is indicated when the patient moves into neck flexion due to the inability to hold the head up.

Sebastian et al. (2015) report a change of 5-10° from a maximal craniocervical flexion position to a relative craniocervical extension position for the deep cervical test and a flexion deflection of more than 10° for the global test is considered a positive finding using an inclinometer. They state that while an inclinometer provides objective values, it may not be required in routine clinical practice as the direction of cranial movement can be visualized by a trained eye.

Other common tests to assess for a cervical motor control impairment are: