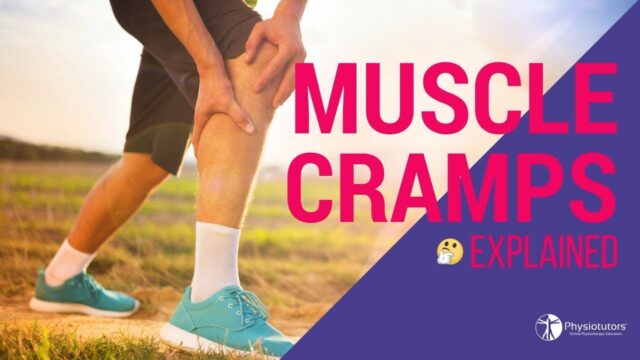 In a 12-year summary report of marathon medical issues, cramping accounted for 6.1% of medical encounters, with 1.2 cases per 1.000 participants. However, exercise-associated muscle cramps are a problem in other vigorous sports too.

It has long been thought that cramps are resulting from dehydration and electrolyte imbalance. The theory behind it is that the extracellular fluid compartment becomes increasingly contracted due to sweating, leading to a loss of interstitial volume. In addition, excessive sweating can lead to concomitant sodium, calcium, magnesium, chloride, and potassium deficits. Both of these effects are reasoned to lead to mechanical deformation of nerve endings and an increase in surrounding ionic and neurotransmitters concentrations, which leads to hyperexcitable motor nerve terminals and spontaneous discharge.

However, all studies supporting this theory have not shown any cause and effect relations, none of the participants in the supporting studies had cramps despite having either serum or sweat electrolyte losses and why is it that cramps only occur within working muscles then and that stretching can relieve cramps immediately?

Schwellnus et al. (2009) popularized the idea that cramps occur due to an altered reflex control mechanism in response to neuromuscular fatigue. Specifically, muscle overload and fatigue engender an imbalance of the excitatory drive from muscle spindles and the inhibitory drive to the alpha motor neuron, which ultimately produces a localized cramp. This hypothesis has experimental support, as skeletal muscle fatigue has been shown to reduce inhibitory input to alpha motor neurons from the Golgi Tendon Apparatus and to increase excitatory input from the muscle spindles in animal models. It has also been shown that when skeletal muscle contracts in a shortened position, there is depressed signaling from the GTOs, which explains why stretching is the best-known and most effective treatment for acute EAMC.

So what are the risk factors for altered neuromuscular control?

It seems that athletes have different individual cramp threshold frequencies, which is the minimal electrical stimulation required to evoke a cramp.

Not surprisingly, having a history of exercise-associated cramps seems to be the highest risk factor for future cramps. Although research is equivocal, it seems that a family history of cramping, as well as a specific collagen gene, might be contributing factors. Furthermore, men seem to be more prone to exercise-induced cramps than women, which might be due to a higher ratio of fast-twitch fibers in muscles of locomotion. At last, Schwabe et al. Have proven that higher exercise intensity and duration lead to a higher risk of cramping, and Shang et al. Found that cramp-prone athletes were more likely to have a history of tendon or ligament injury when compared to non-cramping athletes.

So how can we treat and prevent cramps?

Due to the limitations of the electrolyte and hydration theory, salt tablets and magnesium supplementation  – although commonly used – lack evidence. The use of quinine has been shown to reduce the incidence of nocturnal and idiopathic cramps but is no longer allowed in the United States as it can lead to a decreased blood platelet level.

Nelson et al. (2016) report several promising strategies for exercise-associated muscle cramps, although high-quality trials yet have to prove their efficiency:

At last, it appears that stretching is the most effective treatment in relieving acute fatigue-induced muscular cramping, as it is believed to increase tension in the Golgi tendon organ, resulting in an increased afferent reflex inhibition to the alpha motor neuron.

Feel free to experiment with several of those options…and let us know what helped you!