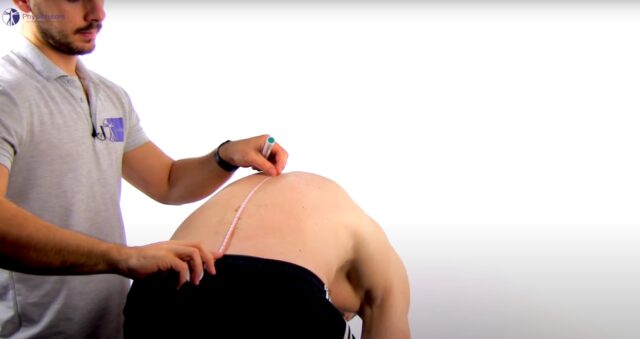 Measuring lumbar spine mobility quantitatively outside of a radiology environment can be challenging. Therefore clinimetric tests such as the modified and modified-modified Schober test have been proposed to easily measure lumbar spine flexion range of motion in the clinic. These tests are most commonly known from the BASMI index used in the quantification of functional impairments in those suffering from ankylosing spondylitis.

Rezvani et al. (2012) evaluated the modified-modified Schober on its validity and reliability when correlating with radiological measurements, and despite finding excellent intra-rater reliability r of 0.97 the correlation of the test with and radiological measurement was only moderate with an r-coefficient of 0.67, which is why ultimately the clinical value is moderate.

To conduct the test, the patient stands upright. The examiner locates the two posterior superior iliac spines and draws a horizontal line between them. A second point is marked 15cm above this line.

Then the patient is asked to bend forwards as far as possible whilst keeping the knees fully extended.

The distance between the previously marked points is measured again and indicates the amount of flexion.

Make sure to check out the original Schober Test which uses the iliac crest as a reference.