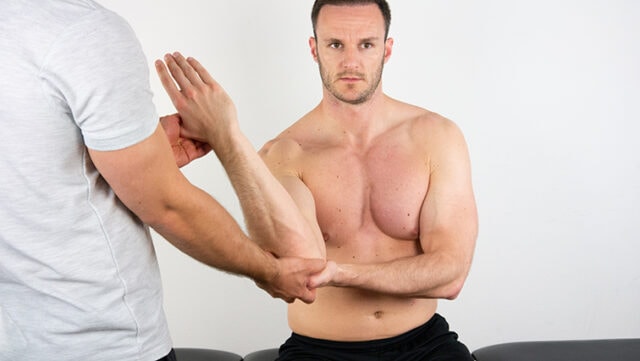 The Modified Milking maneuver aims to exert a valgus force on the elbow and thus provoke the injured ligament.

To conduct the modified milking maneuver, have the patient sitting with the arm positioned at around 70° of flexion, adduction, and maximal external rotation. This position is supported by the patient’s other arm. Positioning the elbow at 70° of flexion has been identified in a cadaver study as the position of greatest valgus laxity.

Proceed by palpating the medial joint line with your thumb. Then, fully supinate the patient’s forearm and pull on the patient’s thumb exerting a valgus force to the elbow.

Other orthopedic tests to evaluate the integrity of the medial collateral ligament of the elbow are the Moving Valgus Stress Test and the Valgus Instability Stress Test.