9 in every 10 participants improved at least gradually over two years after a degenerative meniscus tear.

A secondary exploratory analysis of the OMEX trial (Odense Oslo Meniscectomy versus Exercise) was conducted. The study included patients with MRI-verified degenerative medial meniscus tears between 35-60 years. The interventions of the original RCT were a 12-week, two to three times per week exercise therapy program consisting of strengthening and neuromuscular exercises or arthroscopic partial meniscectomy with instructions for simple home exercises aimed at improving knee range of motion and reducing swelling. As the OMEX trial showed no differences regarding the change in patient-reported outcomes between the arthroscopic partial meniscectomy and exercise group, the data from both groups were pooled.

The outcomes for this secondary analysis was patient-reported knee function and was assessed using the Knee Injury and Osteoarthritis Outcome Score (KOOS) at baseline, 3, 12, 24 months and 5 years. The KOOS questionnaire consists of the following subscales: pain, other symptoms, activities of daily living (ADL), sport and recreational function (sport/rec) and knee-related quality of life (QOL), each scored from 0 (worst) to 100 (best). For all the KOOS subscales, trajectory analyses were conducted to provide information about the course of limitations and improvements in patient-reported knee function over five years.

Further, given the relevance of function in sport and recreational activities in this patient population, potential prognostic factors for the KOOS sport/rec subscale were explored and categorized into demographic, knee function-related factors and disease-related factors. 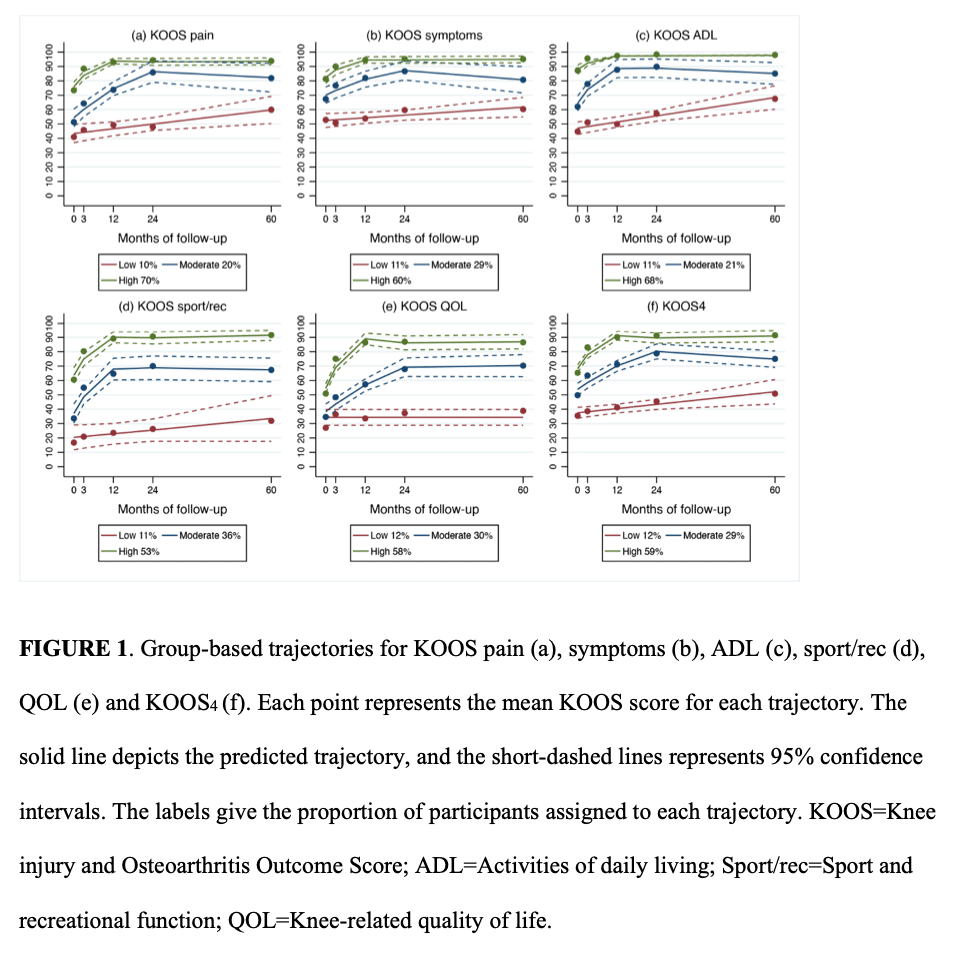 Over the five-year period, the patients in the low trajectory experienced some improvements, particularly for KOOS pain and ADL (19.5 and 23.7 points better), whereas the improvements were lower for KOOS symptoms, sport/rec, QOL. The moderate trajectory improved better for all subscales (between 24.0 and 37.1 points), except for KOOS symptoms (12 points). The improvements in the high trajectory from baseline to 5 years were somewhat smaller, but the five-year KOOS scores were close to or above 90 points for all subscales.

Considering the disease-related factors, meniscus extrusion and radiographic signs of knee OA were significantly associated with belonging to the low trajectory.

No differences were found between the exercise intervention and arthroscopy group of the original OMEX trial, suggesting exercise should be the preferred intervention in patients between 35 and 60 years with degenerative meniscal tears.

When observing figure 1, it seems that no regression to the mean took place. Normally you’d expect that patients with worse scores improve a lot better than patients with higher scores. This again reinforces the finding of the three distinct trajectories for improvement.

The RCT upon which this secondary analysis was based was registered a priori. The authors adhered to the STROBE guidelines to systematically report their analyses. Potential prognostic factors were based on literature. Sample size was based on the primary endpoint at two years in the OMEX trial. As no differences were observed between the arthroscopy and exercise group from the OMEX trial, data was pooled to increase precision and statistical power.

The authors investigated the fit of the model and a good model fit was demonstrated. Two sensitivity analyses were conducted and the shape of the trajectories remained largely unchanged.

The majority of patients with degenerative meniscal tears will experience early improvements after 12 months where pain and knee function approaches the normative data for individuals without knee pain. Patients can achieve clinically relevant improvements up to 24 months. It is important to timely identify those not responding to treatment. Specific prognostic factors for poor function in sport and recreational activities were identified to be higher BMI, anxiety and depression, greater knee pain, poor perceived knee function, weaker quadriceps and hamstrings, worse performance, more meniscus extrusion and radiographic signs of knee OA.